Uncured, the New Yorker progressive death metal band brought their raw sounds to Los Angeles. The quartet has been active since 2014, with two brutally talented guitarist, bassist and drummer. Uncured ravaged the venue, they played an insane set, the fans moshed and partied all night long. From insane guitar solos to raw vocals, Uncured delivered a powerful set. This band is going places with songs off their newest album release titled  Medusa. Drummer Liam Manley attacked his kit with aggression and technique, both guitarist (Zak Cox and Rex Cox) paced back and forth conveying a brutal sound with heavy riffs and talent.

The energy of this young band was instilled in people, and the crowd was ready to destroy the the Belasco. Uncured is definitely a band that will have you headbanging, and asking for more metal to unleash your rage out. Make sure you pick your copy of their record titled Medusa, and independent release.

Jinjer, the Ukrainian metal-core band was formed in 2009 and has conquered America. Fans, left and right, are talking about the incredible talent they have, as they shined on stage at The Belasco. With Tatiana Shmaylyuk delivering gutturals, Jinjer won the hearts of Angelenos metal fans. The band played a tight set, with plenty of energy to keep the party going. The powerful vocals by Tatiana were decapitating, paired by the intense guitar work of Roman Ibramkhalilov and neck breaking drumming by Eugene Mantulin. The bass adds a crazy depth to this line up making their sound heavy. The band together delivers all their energy on stage, as the fans mosh and headband relentlessly they play songs off their newest album titled Cloud Factory. The mixture of progressive, djent death core allows for opened minded fans to enjoy their sound and at the same time witness a powerful performance.

From the haunted shores of England, the fog brought Cradle of Filth, the masters of eerie sounds and Victorian stories. Cradle of Filth has been exposing the world to their black extreme metal since 1991 and despite the multiple band line up changes they retain that sound and vision. On Thursday, April 19th 2018, the ensemble brought their wrath to the Belasco Theater and the sold out show was beyond phenomenal. Dani Filth leading the ghouls shrieked, and howled like never before. His energetic performance amped the fans, who for years have worshiped his vocals. Fans from all over California came to see them live and it was a show worth retelling. Richard Shaw on guitars played a macabre spectacle, teaming up with Marek Smerda on lead guitars, they brought the sinister tunes like “Dusk and Her Embrace”, a classic “filthian” song. This song among many like, “Gilded Cunt” ravaged the theater. The mosh pit was relentless as fans lost control of their bodies with each keyboard sound by Lindsay Schoolcraft, who behind the shadows projected evil tones and headbanged along to the melodies. 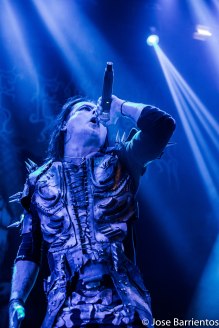 For some fans this was the event of the year, as they have followed Cradle of Filth since their High School years, for others like band members of Devil Driver and Butcher Babies it was an honor to witness this British band live. Fans wore corpse paint, gothic attire and eye contacts that resembled those of demons, the fire in their souls was tamed by the macabre songs conveyed by Cradle of Filth. The set list from this fiendish gathering was beyond perfection, Daniel Firth on bass injected the fans with catastrophic bass lines, as track “Her Ghost in The Fog” tore fan’s souls apart he rocked hard on stage. The Drummer, who behind a glass wall delivered his part, a brutal display of power is known as Martin Marthus Skaroupka, I’d like to address him as the best drummer Cradle of Filth has had in years. His membership with Cradle of Filth started in 2006, and ever since he has reigned and owned that throne he sits upon. With out missing a beat, Martin delivered riveting drum blasts, speed double bass pedal explosions and pushed the band beyond universal boundaries. Lead singer Dani Filth is at his best shape yet, he growled and screamed for nearly 2 hours, a brutal set, any Cradle of Filth fan would agree. Cradle of Filth is at their strongest, active and ready to take over Japan in their next tour. So if you dared miss this Cryptoriana World Tour, book your flight to Japan and make sure you witness a malevolent ritual.