Leave it to a venue like The Observatory, with state of the art sound and lighting, plenty of opened space for some brutal moshing , and plenty of beer, add some death metal bands and you have what is called The Summer Slaughter. The Summer Slaughter is an extreme death metal festival and it turned ten years old, what a brutal way to celebrate a decade of debauchery by having bands like; Ingested, Slaughter to Prevail, Revocation, Krirsiun, Suffocation, Carnifex, After the Burial, Nile and the lords of death metal, Cannibal Corpse perform. Walking to will call, and collecting that golden ticket to enter the Observatory in Santa Ana, Ca. is exhilarating, as you approach your turn to collect it,  you compliment other metal heads shirts, and make friends to mosh in the pit with. The smiles are not on metal heads’ faces, they let you know they are happy and excited by screaming Nile! Cannibal Corpse! at the top of their lungs as they walk up to get searched by security. Good thing there were no metal detectors as they would go off non-stop as those fan go through them.

The first thing you do as you enter this amazing venue, is look for the merchandize booth, where you will get countless amount of gear from your favorite bands and those soon to be the newest addition to your list. 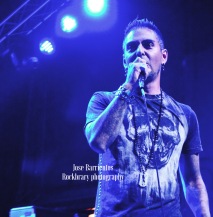 The crowd of metal heads out on the patio is mingling and talking about previous shows, while others take photos with band members who humbly and excited sell their merchandize. There is nothing better than collecting that gear from the band’s guitarist and/or lead singer, all band members are taking charge and gratefully hand over your purchase. The bar is filled with metal heads who are prepping up for mayhem, getting a cold one or a bite at the bar/grill inside the Observatory, this will be your next HOB, simply better as the god father of metal runs the show there, Jose Mangin.

The festival had a nice warmup by Caligula Dance Party, followed by Akasha. The third act Enterprise Earth was a brutal way to start the day. Soon after this act a band from Manchester, UK, Ingested, went on stage to give us a taste of British Death Metal, the band recently signed with Unique Leader Records and they are excited for what is next to come. Ingested did a solid set, with brutal tracks from all three albums, limiting the set to 20 minutes. The guys completely destroyed the stage, tracks like “Skinned and Fucked”, started the mosh pit.

The brutal sound from this band is all due to influences from the killer act of Suffocation, among those influences is Prince. Jay(vocalist) and the gang proudly asserted that in the interview our reporter Vic had with Jay Evans during the Summer Slaughter. The heavy guitars and blasting cannons were resonant in the venue as you see vocalist Jay go insane on stage roaring with power to the crowd of metal heads. Ingested is currently touring America during this Summer Slaughter and expects to return to the studio for their fourth full length album to be released in the near future. Ingested has accomplished a lot, among those accomplishment is the self release and distribution of 500 copies of their EP Revered by No One, Feared by All, in which lead singer Jay expressed the personal value of that record, as each track and lyric were expressing his emotional, mental and life stage. Ingested’s brutal display of talent was followed by  Slaughter to Prevail, whose mean sound devoured the fans and brutalized their minds. 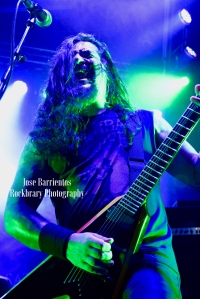 Krisiun went on stage and gave the fans what they were looking for, heavy machine gun guitar riffs Moyses Kolesne, blasting drums by Max Kolesne, and classic songs like “Scars of The Hatred” among others, but we don’t want to spoil it for the remaining of the tour’s sake. The vocals by Alex Camargo are unlike no others, and they play the classic death metal no one can imitate.  At this point the fans felt the furious and rigorous sounds of death metal deep within, as they celebrated this decapitating gathering. Revocation was on stage, energetic with the power of an atomic bomb, their brutal riffs earned them new fans, as many had not seen them before and bowed down to the sounds of the killer guitar solos by David Davidson and rhythm by Dan Garguilo. The drums were aggressive and skillfully played by Ash Pearson, while on bass Brett Bramberger gave the band a deep heavy sound with speed.

The following band was Carnifex, who with their new album release Slow Death went on to show the death metal community why they belong in this tour. The album Slow Death is an evolution by Carnifex, a compilation of talent obtained with timed they were able to immortalize those influences in that album. T

he sounds of death metal are imminent and have elevated Carnifex to this death metal level.The following act has destroyed stages for decades now, and they gave the fans a set to die for. By this time the fans wanted blood, in the moshpit the relentless beating went on and the smell of rage pervaded the arena as Suffocation blasted eardrums of those who remained standing. Some tracks that captured fans souls were “Pierced From Within” which is a classic death metal anthem. While “Purgatorial Punishment played”, the pit made the venue tremble, as Terrance Hobbs shredded on the brutal riffs along with Guy Marchais. The band is simply heavy death metal sounds, which will initiate mayhem in any god forsaken pit. The next act on stage was After the Burial who played fast and brutal as the set was coming close to an end, right before Nile the lords of greek death metal. Nile has toured various times in California, and this tour was a brutal from the aggressive trio, who with songs like Call To Destruction off their latest album – What Should Not Be Unearthed ravaged the stage. Karl Sanders and Dallas Toler-Wade are the perfect guitar duo. They shreds majestically to songs like “Black Seed of Vengeance” and “What Should Not Be Unearthed”. Meanwhile the speed of George Kollias on the drums is demented. A sound like no other, with patterns that easily make structures crumble do to its blasting sounds.

The night was young, and possibly even cut short due to a show to be played there soon after the last contender, which Jose Margin happened to introduce, Cannibal Corpse. Some hip hop jokers went on the stage after this brutal massacre. Nonetheless this was an exciting moment. For metal heads and lovers of gore, mutilation, and flesh feasting carcasses, Cannibal Corpse are the god fathers of Death Metal. Their set is dark, with red blood lights, and ominous guitar sounds.

The introduction to “Evisceration Plague” off their album Evisceration Plague sounds off, followed by classic brutal style songs like “I Cum Blood” and our editors all time favorite (as well as true fans) “Hammered Smashed Face”. The anticipation of their brutal performance was met with grotesque sounds as George Fisher expelled demons out of his body with that demon like voice, in conjunction of his powerful helicopter headbang. Being underneath the stage one could feel the wind blowing a breeze of fresh air in that hellish venue, meanwhile Alex Webster would play his majestic bass solo half way “Hammered Smashed Face”. Alex Webster is the mastermind behind Cannibal Corpse, you can see his fingers play the same riffs as Rob Barrett plays, in synchronicity and with speed. Meanwhile Paul Mazurkiewicz abuses those drums with rage and rampage. Pat O’Brien has to be the most relaxed guitar player as he performed with such ease, and dexterity, picking through songs like “Kill or Become”. Pat shreds and hits you in the throat with brutal force and ability on his killer axe. Cannibal Corpse demonstrated over and over why they are the masterminds behind Death metal. 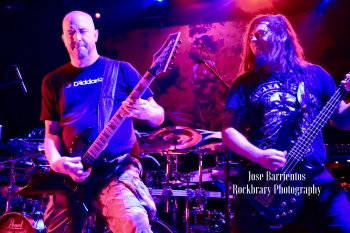 The set was a murderous one and the summer slaughter had come to and end, but the fans raged on and will remember that this event was for them, to share their love for metal, and not demonstrate hate, because there are others just like them and that common feeling is expressed with songs of hate, brutality, gore, debauchery and most of all with the guitar riffs and the skill musicians like these conjure in their dark corners for the world to feast upon. The induction of Ingested to the American death metal scene was a success and all metal heads will be talking about the 2016 The Summer Slaughter as the moment death metal was at its peak, and will continue to feed the masses those brutal songs.

Interview With Jay Evan of -Ingested