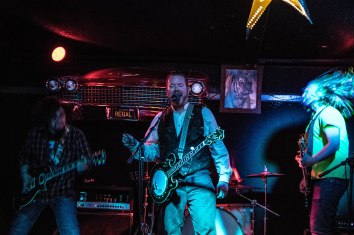 A dive bar where booze flows heavily with a small stage is the last place you imagine you’d find some talent. However, the Regal Inn in Lakewood had a diverse set of bands lined up with complex sounds and intensity in their performance.

The night was Friday 25th, 2018 and Red River Massacre went onstage, like any other Friday night, ready to rock out. Their lead singer Keith Irish and Banjo player dresses in a style you would never imagine he roars the way he does. Miguel Hernandez shreds on guitars a natural player. Meanwhile on bass Jeremy Scott adds brutal sounds to encompass the drums by Adriel Hernandez. The guys played a melodic set, with Keith Irish roaring loud to this doom yet groovy metal sound. The band destroyed the stage and fans need to get their music to understand the emotions this band elates.

From Connecticut a supporting act known as When The Deadbolt Breaks, flew for two special shows; one of those being this night. Atala, was having their debut album release and brought these bad boys together to perform and deliver evil. When The Deadbolt

Breaks is a mixture of sludge metal, with aggressive vocals, some that will make your body vibrate intensely. Doom with a sledge hammer is how you can describe this band. Aaron Lewis, Mike Parkyn and Randy Dumas deliver a powerful performance in a low light stage, down at it’s loudest.

The main band Atala, Twentynine Palms, Ca- based sludge/doom metal has unleashed their full length concept album titled, Labyrinth of Ashmedai. They performed a bone wrecking release party on Friday January 25th, 2018 at the Regal Inn, in Lakewood, Ca. This performance was very quaint, and personal. Kyle Stratton who owns tattoo shops in their own town not only performed heavily but he also aided each band to load and unload their gear, a true comrade. Each performed song from this album was played with emotion, from the cannon blasts (Jeff Tedtaotao) to the deep bass notes (Dave Horn),  all were encompassed with loud vocals of an angry demon. Atala, a three man unit crushed their set at the Regal Inn, and their powerful sound will bring masses together to headbang in future shows to come. This album is a catastrophic composition of emotional sounds, that will ravish your body with fury and explore the current world issues. The band recently signed with Salt of The Earth Records, and have toured with bands like Chelsea Wolf, The Obsessed and part taken in festivals like Roadburn festival.

Kyle Stratton commented- “Sorry I was sloppy, I was just going with the emotions, if it was’t for the other guys I would have been off way more”. We beg to differ, they sounded tight and phenomenal!

A humble man, who delivers brutal music is always welcomed in our world, keep rocking out Atala, and let the brutal moments begin.