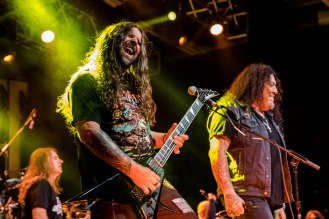 The crowd was drawn by names of the band members, whose performances took place the night of January 24th, 2018. Cristina Scabbia, and Nita Strauss were among that line up, and they represented the women of metal this brutal night. From tracks like “Hit The Lights” by Metallica and and original track like “Can’t Kill The Devil”, the nonstop

head banging was felt all across the music hall. Chuck Billy went on to sing a selection of songs, from the previous mentioned song to duets with Mark Osegueda. Another stellar vocalist was John Bush, who with powerful vocals, delivered a phenomenal performance to the sound of Andreas Kisser (guitar) of Sepultura, along with those of Gary Holt current multi band member, Slayer and his very own Exodus. The guitar solos were ear piercing, and fueled fans to rage on the pit, crowd surfers were plentiful. You can not have all male singers now, as Cristina Scabbia of Lacuna Coil delivered what is known as an angelic performance, head banging and rocking hard on the stage, she joined David Ellefson and Mark Menghi to convey power and skills. Her majestic voice enamors fans with ease, allowing them to rock out.

The House of Blues was packed, this year the fan base grew bigger and no one held back from having a great time. Compared to last year’s show, the house of blues was a mad house. Fans left the NAMM convention early enough to ensure their attendance during this delivery of sonic waves. The choice was done right, as Metal Allegiance delivered a brutal set. This super group if we may, is compiled of pure talent, from the drummer (Mike Portnoy) to the bassist Mark Menghi, they all know their parts, and even enjoy a laugh or two on stage. For the band playing together brings them closer as a metal

family, and there is no division once they are on stage. Bobby Blitz (Overkill), made jokes about Jersey being better than LA, and Chuck Fucking Billy joked-“ Mark Menghi, bassist audition”, all in good humor and displaying the camaraderie which unites them. Aside from that, when you have Nita Strauss (Alice Cooper) on guitars, best be ready to share the solos, as she plays with ease, and versatility: she brings a lot of energy to the stage. The multi talented unison of metal gods spread love and brotherhood from the stage, no metal head was left behind, as even South of Heaven was played the fans rampaged the pit. A soon to be classic song, was perfectly executed by Alex Skolnick, on guitar and Mike Portnoy on drums, the entire ensemble performed with perfection.

The House of Blues once again survived a brutal assault by what is know to be the most intense music worldwide, Metal. The fans had a great time, and they hailed each member of this super group. There is no place like a metal show to witness what those who were there did, brotherhood of the metal heads. Keep rocking hard, raise the horns and carry on the message of metal.