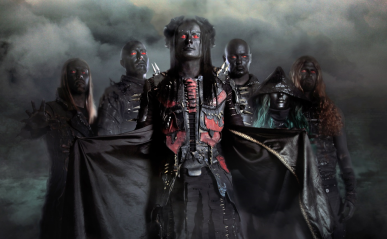 Cradle of Filth has spent a quarter of a century bringing morbid Victorian tales, with Dani Filth shrieking to English poetry. Over the years, Cradle of Filth has unraveled symphonies of black metal in previous attempts, and Cryptoriana- The Seductiveness of Decay is Midian; classic black metal with a modern touch.

The album kicks off with titled track- “Exquisite Torments Await”, a dark introduction foretelling the songs ahead. The requiems inspired by darkness and melancholic lyrics are all part of Cradle of Filth’s new record. The titled song “Exquisite Torments Await” warns you of the fancy guitar work, and relentless drum blasts the entire album consists of. Cradle of Filth certainly gets the horror themed riffs on point, the guitar work on track “Heartbreak and Seance” are classic black metal with elements of thrash metal and at some points the melodies remind you of Iron Maiden’s tracks. There is definitely some inspiration by Iron Maiden in this black metal album, however Cradle of Filth seduces you with grim symphonic orchestrations. The clean vocals by Linsay Schoolcraft are majestic, and arranged in the perfect section of each track. The song “Achingly Beautiful”, is a grotesque requiem, not for the faint hearted. With Dani Filth’s classic growls, the song includes all the elements of Cradle of Filth. The sound has a modern touch with guitar solos by Richard Shaw and  Marek “Ashok” Smerda, and those clean vocals enamor the purest of souls. Malevolence and creative musicianship is what “Wester Verpertine” is conjured with, the song has thrash metal riffs through out its entirety. A seven minute song that has guitar solos, bridges and intense vocals, builds up with somber tones. At one point you hear a galloping by both guitars and drums by Martin “Marthus” Skaroupna, paying rendition to the Iron Maiden galloping style.

The album slashes your throat with each song it is composed of, the “Seductiveness of Decay” kicks off at a slower tempo, but builds up its malevolent, gothic tale. Cradle of Filth has passed down the bloodline from pervious band members, retaining their black metal style, and hearing new killer guitar riffs that are catchy is a breeze of fresh air. Darkness descends upon you as you listen to the entire album, the choruses which are added to this record provide an ominous feel. The album is composed with various elements of metal, enough additions like the chorus, and guitar solos  and bass notes by Daniel Firth are the reason you will listen to it repeatedly. Cradle of Filth has evolved as a band, with fresh blood, yet classic sound the improvements are vital and perfectly captured in this dark tale. The record is making a splash in the billboards, with due recognition, as this band has the talent we’ve all been waiting for to resurface. Hail Cradle of Filth, and make sure to get your copy of Cryptoriana- The Seductiveness of Decay, out now via Nuclear Blast Records.

Heartbreak And Seance’ & ‘You Will Know The Lion By His Claw’ can now be purchased as an instant grab track from all known download platforms: http://nblast.de/CradleOfFilthDigital