Detroit rock city infiltrated California, with shock waves of heavy artillery, brutal vocals and some melodic tunes from bands like Child Bite and Battlecross. A super band, with the voice of a legend, and guitar riffs heavy enough to make buildings shake; Philip Anselmo’s Superjoint destroyed the Whisky A Go Go. Thursday night was a busy one for the Sunset strip, as The Viper Room had live shows, the Rainbow was a mad house too. However, the loudest noises were resonating from the Whisky A Go Go, a night filled with demented metalheads, ready to mosh. 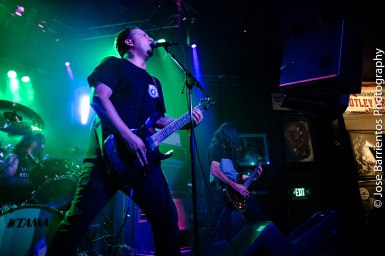 The stage was warmed by local band Darksun, a melodic, heavy brutal metal outfit. These guys pack an intense set, with aggressive bass sounds and pure metal. The fans enjoyed each track by this band, one that needs to be out conquering more venues. Child Bite is an act in itself, a heavy fast tempo hardcore punk/metal. Shawn Knight on center stage is a “strange” character to some, and a fun to watch frontman to others. His energy is uplifting and contagious. With guitarist Brandon Sczomak giving you those guitar melodies, with aggressive punches to the throat, Child Bite packs a modern sound. A sound that will invade your body and make you jerk willingly. The crowd went berserk when they heard track titled “Video Blood” and a recent release and  “Born A Hog”. Jeff Kraus on drums empties his soul behind that throne, adding tones that make Child Bite the post-punk band that will rise in this deaf world. Sean Clancy provides a stylish bass slapping, sort of like when you smack that ass and are giving it to it good, real good. The bass resonates giving depth to this Detroit band. A Housecore Records forged force is hitting the stage again on April 29th, and they will keep your ass hooked.

Another comrade from Detroit, Michigan that thrashed the stage is Battlecross, this band can shred and keep the crowd energized. Hiran Deraniyagala pairs up with Tony Asta, two guitar virtuosos who have fast riffs and killer solos. The band played tracks like “Push, Pull, Destroy” and “Kaleb”, two striking thrasher songs. The finger mobility by Don Slater is ferocious, imagine a boneless set of limbs flapping away at immeasurable speeds. Kyle”Gumby” Gunther has been working hard on stage, and crossing the desert to get to California was a brutal experience. However, when he was on stage his energy levels were felt by the crowd who reacted to his genital jokes and gruesome vocals. His vocals are aggressive and conveyed with power he amped up the Whiskey A Go Go for the act that followed. The headliner, a return of the NOLA sound took the stage and captivated each dying fan.

The fans were ready, some fans commemorated Philip Anselmo’s past and showed up to celebrate his present. The present is Superjoint, a southern rock band that brings up the heat on stage. With Philip Anselmo fronting this brutal band and Jimmy Bower on guitars (Eyehategod, Down and Crowbar), this band has power that will make a crowd mosh with intensity. The band played songs from the Superjoint Ritual era, as well as new material. The titled song, “Caught Up In The Gears of Application” was a fans favorite. The man, the legend Philip Anselmo is back and his persona is stronger than ever. Philip Anselmo demonstrated a brutal attitude on stage, goring out to tracks like “Asshole”, and a personal favorite “Ruin You”.

Drummer Joey “Blue” Gonzales punished the drum heads relentlessly, with agility only  a true rocker possess. The heavy riffs, bass and drums shook the Whiskey A Go Go, a force that will be known as NOLA metal for years to come. A decade in hibernation, pushed them to move forward; and with desire to wipe the masses they have written a brutal new record titled Caught Up In The Gears of Application. Steve Taylor completely enamors the fans who love the bass, while the rest of the gang decapitated your soulless body with heavy riffs, cannon blast and powerful vocals. Superjoint is back, and they brought company, the diversity of this tour’s bands only adds up on the books, bringing all metal fans together in one room to hail the mighty sound of the riff.

Check out our Full gallery of this brutal show here

Remaining Caught up In the Gear tour Prt. 2