Devil Driver a California metal act performed at The Regent Theater, on Thursday February 9th, 2017 giving metal heads their fix of heavy riffs. Devil Driver loves playing local shows in California, specially being from Santa Barbara. The band debuted their first single in 2003 titled I Could Care Less, a heavy palm muted riff with character. From that point on, the rest just unfolded into this energy driven band which has released seven full length albums with their most recent success of the album titled Trust No One. They are currently on tour with Bay area thrash metal purveyors Death Angel, Winds of Plague, The Agonist and Azrael. The line up could not be heavier than this in support of Devil Driver’s Bound By The Road Tour.

The Regent Theater’s stage was packed with talent, as band after band conquered metal heads on a Thursday night. Azrael, was the opening act a brutal display of metal woke up fans. This band was followed by Montreal, Canada’s The Agonist, a melodic metal band already on their fifth album titled Five; a creative album inspired by all genres of music. The Agonist has toured extensively and with five records on their belt, this band has rattled Southern California and it’s crazy crowds. The fans loved the sound created by this Canadian band, metal with melodies, and depth captivated fans making them headbang and rage on the pit. Danny Marino rocks the stage with skill, while Vicky Psarakis gores out on vocals. Chris Kells persona on stage is energetic, and Simon Mckay executes the drums relentlessly giving a dose of pure mayhem. Pascal Jobin joins Danny on guitars with heavy tones and fast riffs, together they make crowds lose their mind with astonishing tones and melodies. All sounds are derived from many styles of music, giving you an end result known as melodic metal.  The stage was warm and Winds of Plague came crushing the crowd with their death core sound. Elbows were swinging and the most pit was brutal, as this band wrecked havoc. They Opened the way to the next contender. 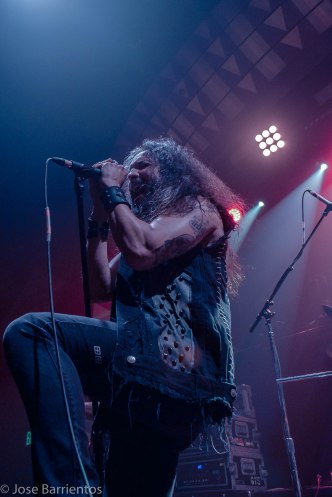 The iconic thrash metal act, Death Angel, swept the stage and fed those hungry metal heads some aggressive sonic waves. It was Mark Osegueda’s birthday and he was excited to share it with the people that support his music and love Death Angel’s sound. The set list was a classic one, revisiting “The Ultra Violence”, and shredding to “Caster of Shame”. Death Angel does what they know best and that was thrashing the scene. Ted Aguilar was amazing on rhythm guitars, while Rob Cavestany shredded away on lead guitar. Will Carroll on drums, was non stop hammering away, perhaps the character that never stops moving through out the night. With a vivid smile, Damien Sisson slapped that bass, interacting with all the true Death Angel fans, while the one and only Mark Osegueda reached music notes no one else can in the thrash metal scene. Death Angel left the scene blazing hot, ready for Devil Driver to continue with the brutal metal they convey.

Devil Driver pumped up the crowd with their heavy riffs, fast drums and loud singing. The band came in kicking strong with track titled “End of The Line”, the fans were savages raging in the pit. That dangerous mosh pit went on all night as the heavy guitar riffs were played by both Mike Spreitzer and Neal Tiemann. Mike Spreitzer played with ease as he headbanged side to side during the heaviest guitar solos and powerful chords.

Lead singer Dez Fafara gave his energy to the crowd, engaging with them and projecting that brutal vocal sound on songs like “Daybreak” and “I Could Care Less”, this show was a real neck breaker for fans on the floor. The drums were cannons, on a quiet night in Downtown L.A. as Austin D’Amond sat on his throne, blasting away the night on tracks like “Ruthless” and “My Night Sky”, a treat to experience among the crowd. Guitarist, Neal Tiemann, rocked away the night with heavy tones on “Grindfucked” and more, while Diego “Ashes” Ibarra gave the band that extra push with his magnificent bass work. The set was intense, fans would joyfully release their tension in the pit, while others were spectators and enjoyed the music the place resonated with explosive sounds, those of a metal community committed to their idols, and supporting these great music acts.

Check out our interview with Danny Marino- The Agonist