We are across the country talking to Jake Oni, who is the lead singer of ONI the progressive death metal band straight from Canada, we discussed their rapid success, fans, their road to the Knotfest, and Randy Blythe, yes you read it right. This is what Jake told us about this dream come true, surreal lifestyle and hardship back at home. 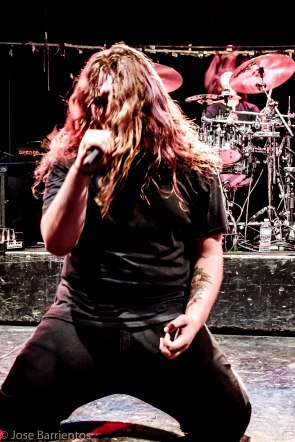 Hostile Jo- “Hi Jake, quick lets get down to the good stuff, you have said and I quote “I want to be the band I never got to see” did any bands inspire you? and what exactly did you mean by that?”

Jake- “Well I spent most of the time in the Caribbean where i grew up went to school etc, so i implied only that i wanted to be like the bands out there that never came to the islands. I love many bands from the classics to the new ones, and i was always influenced by Slipknot, and DreamTheater. Hence our more progressive take on metal. All the bands out there are super rad, it was rare to have any bands come out, we wanted to play heavy, fast and also have those hits that people in stadiums can all unite to, and of course mosh?”

HJ-“What can you describe your sound closer to? Special incorporating the rylo-synth?”

Jake- “A lot of people have said we are similar to Animals as Leaders, others like Fit for An Autopsy, we like to play thrash, we have two great guitarist that can shred so we incorporated a Xylo-synth.”

Jake- “No Particular reason, i mean Johnny was always a friend and we went to school together, we all like bands that play keyboards in their albums, so we decided to add this. We have pretty good guitar shredders we decided to push the limits and keep it interesting. we are more on the progressive side. It was a very organic as he can play like a piano player with the same ability on the Xylo.”

HJ- “You have a new album coming out via Metal Blade who you just signed with, and Blacklight Media. What is that album similar to?”

It is a heavy album, a combination of Periphery and Dream Theater there is a lot of guttural sounds, and extreme metal that we love to play.

HJ- “I saw you perform at The Phoenix Theater in Petaluma, CA. you guys brought mayhem on stage, what keeps you focused on stage despite any type of reaction from the audience?”

Jake- “ Before going on stage I always think it will be a great show, I have confidence in the band and make sure we give the best we have.”

HJ- “Is the tour life everything you expected?

Jake- “I love the tour life, I am very grateful for having the chance to do what I love, and having kids and a wife it puts some pressure and its difficult but very thankful I can do this.”

HJ- “ You did some shows on the road to the Knotfest, what was the crowd’s reaction”?

Jake- “Petaluma and all other shows were rad, as soon as we notice that the mosh starts we know we are doing something good. Some people say its music for musicians, which is true, we play progressive metal, its harder to appreciate it if you don’t have an understanding of it. Other bands are going to hate, but we play what we want to and enjoy playing, if it sounds right to us and we dig it that is what matters. There have not been any negative reports from fans, we are happy with what we are doing.”

Hj- “Speaking of the Knotfest, how was it playing in such a huge show, specially since you are just starting?” Also how sick was it to have Randy Blythe join you guys on stage?”

Jake- “Well it was fucking amazing, to play in such a big festival, we got lucky our manager got us in, (Josh), also having Randy Blythe join us on stage was huge, I am a huge fan, he is one of my favorite singers and have always respected his work. At first I was excited around him, then we became good comrades and during that show it was amazing. He is such a cool guy, not pretentious at all, I was stoked when we heard he agreed to record with us.”

HJ- “You guys just signed with Metal Blade Records and have the upcoming release of Ironshore in November 25th, via Blacklight Media and Metal Blade, how did you first react when Metal Blade signed you guys?”

Jake- “It has been surreal as to how things are happening, but we are excited to do this two album contract with Metal Blade Records, our management has been very helpful. Josh has been a great guy to record with, he pushes the right buttons, if things sound good he will tell you, and if things are bad he will say “that was horrible don’t do that again” which is a great learning experience. I would not want to work with anyone else. Blacklight Media opened the doors for us, and thats how we landed the deal with Metal Blade Records as well as all the hard work we have done and the push from out management.”

HJ- “For our closing question, what advice do you have for young musicians who are trying to make it in the scene?”

HJ-“Thank you Jake, this was a pretty killer chat, we are waiting for the album to drop and spread the word about this brutal act keep it metal.”

The adrenaline that runs through your veins as ONI plays live is indescribable, as they will shred on guitars, and majestically play the Xylo-synth. ONI is currently waiting for their release of Ironshore via Blacklight Media, and Metal Blade Records on November 25ht, make sure you get your copy of this brutal debut album. Also check out the dates of ONI in their tour with Children Of Bodom and Abbath, and recently booked European tour. Keep it metal and headbang all day.

Check out The Video To “Eternal Recurrence”

2 thoughts on “Jake of ONI Talks About How Surreal Life Seems, The Knotfest and Being Buddies With Randy Blythe”