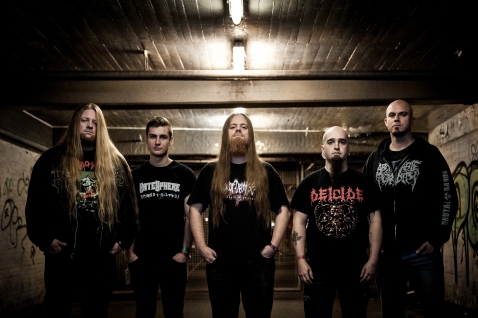 Brutal Death faction- Dawn of Demise will release their unrelenting new album “The Suffering” on August 26th via Unique Leader Records.  The eleven track album was mixed and mastered by Tue Madsen, at his own Antfarm Studios. The band has some short, but excited words- “We are so pleased with the new album”, they don’t say. The album starts with a massive brutal track titled “Sadistic Gratification”, with breakdown style guitars followed by an ominous hostile attack. Scoot M. Jensen on vocals growls with a relentless hatred on this song – “To take another life” are words you can hear in this track, along with the blasphemous drums by Bastian Thusgaard. The track- “Destined To Suffer” has amazing guitar work by Martin K. Sorensen on lead, and Astor Kristian Palsson on rhythm guitar. The pitch harmonic or otherwise known as phantom harmonics where you least expect them giving the song a perplex sound reflecting those of Cannibal Corpse’s brutality.

The songs are heavy, containing little speed as the band likes the powerful sounds of bands like Obituary, Suffocation and others. They are a savage, dark force that will take the cadavers from the crypts and reanimate them. Now, if you made it to track number seven,- “Coercion of The Victim” you most likely are a metal head, this track has cannon blast and a killer bass sound by Bjorn Jensen along with backing vocals, because every demon growling always needs a back up legion to support those maniacal lyrics. The Suffering is out on August 26th, via Unique Leader Records and it kills. It is the album to set fire during this California drought, and heat so make sure you have that date marked as it will give you crazy riffs, and blasphemous drums.