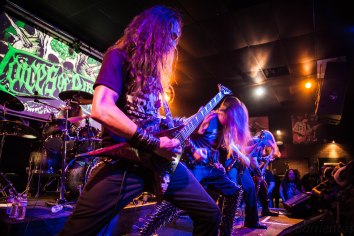 The Anaheim, Ca. melodic death metal purveyors Voices of Ruin unleashed a whirlwind of sensational riffs in their latest album titled Path To Immortality via M-Theory Audio. Their sound is a combination of classic heavy metal and modern death metal. With catchy hooks and endless melodies Voices of Ruin will have you head banging instantaneously.

The album kicks off with a subtle introduction, preparing you for the chaos that will soon unfold before you and make your ears bleed from joy. Path To Immortality is their first full length album, packed with cohesive drums and relentess guitar work. The titled track “Carved Out” resembles a faster Amon Amarth, hailing from Los Angeles, it delivers a poignant riff in minute 2:40 transitioning to the continuous mayhem. The self-titled track “Path To Immortality” is a skull smasher, with plenty of tremolo and guitar licks it stands it’s ground profoundly. There is no room for breathing, each track is composed with a musical dexterity which will place this band in the higher ranks of the metal scene. The drum work in the record fills in spaces in the right moments and you can definitely hear the creativity coming from behind that throne, with explosive double pedals, and meticulous timing. Voices of Ruin projects a powerful energy with this album, blasting away and delivering intense vocals enshrined with musical genius.

The band demonstrates their master skills and ambition with this melodic death metal requiem. In their trek to this milestone, they also decided to cover The Foo Fighter’s track “Everlong”, I do not think I will ever hear it in the original format ever again. Grab your copy of this adrenaline filled mosher, Path To Immortality.

Voices of Ruin- Path To Immortality