Avantasia will be releasing their new album titled Moonglow, on February 15th, 2019 via Nuclear Blast Records and we had the chance to talk to creator, writer and composer Tobias Sammet. Here you can read about some fun thoughts and the multiple guest artist that took part of this majestic album.

Hostile JO- “The new titled album Moonglow will be released on February 15th, 2019 via Nuclear Blast Records, was this a more intense album in terms of recording?” 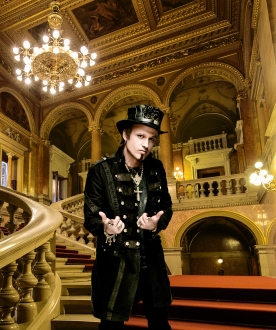 Tobias- “It was really easy, I do not know  if it was bc I had a lot of time to write it and playing it, I didn’t plan to do an album it felt like a hobby. I thought, I’m going to slow down a little after the 10 world tours; I didn’t want to fall into routine. I made the deacons that i wasn’t going to do any work for now. I built my own little studio, you sit there hammering sound treatment elements and learning more, sonic treatment to the wall, I had great fun putting the studio stuff together.

I didn’t have a schedule, no record contract and no deadlines. By the time I made the decisions ideas just kept flowing, everything was put together very organically. Maybe it could’ve been a solo record or something like that. I realized it sounds and feels like Avantasia. When I knew that there was a new album, it came together very naturally stress only started when the album needed to get mastered and mixed.”

HJ- “You have multiple guest artist in this album From Mille Petrozza to Geoff Tate and Candice Night, did you give them creative freedom during the tracking of their songs?”

Tobias- “In some cases I knew that a certain singer would sing a certain line. In his (Mille Petrozza) case we had already spoken about it he has been a friend of mine, it simply never materialized. In other passages I knew, for example with Geoff Tate I knew he would be on the record when I was on the writing process. The whole melody, when you write with someone in particular, it stimulates you. Theses people that I’ve worked with before they have been huge inspirations to me its inspiring to write for them.

In 2001 he was not available-  I thought Hansel should sing, he was busy those lyrics were not written with Hansel in mind, specially “The Raven Child”, I thought it should be a female voice, I know it would be to cliche, with the celtic sound, harp and melodies I thought no Hansel can do it. I asked him he immediately agreed, its hard to imagine this song with out him.”

For the track “Moonglow”- I had Candice Night singing it-I wrote it with a certain type of voice in mind, I thought it could be Candice and  she agreed. She did a phenomenal job.

What helps is that I maintain to be a fan, I want to recrod music that I would want to listen to. I am singer myself and a liar bird, its the bird that can imitate all sorts of voices, I’ve seen it and it was scary- they imitate sounds immediately that they hear- they do it all with their. I am so inspired by Geoff , Michael, when I do demos I try to think what would they do, and I have listened to their work so often that i can imagine what they would do and it works. I have a rough idea about their range and type of singing, being a singer and a fan myself helps.”

HJ- “What was important to you when you hit the recording studio?” Tobias- “With some guest artist I wasn’t even in the same room, like Ronney Atkins, and Michael Kiske, you know you will get a high quality product, they have experience they know exactly what to do with the voices and my songs. Others like Jorn Lande,  he always comes to Germany, we work together in the studio, we always plan to do two days of recording, he goes in and records 1/2 hour then we go have a beer. This time was really exciting working wi Geoff, last time we worked together he recorded in the studio somewhere in Seattle, when I saw him on stage I thought man he is so versatile.

He is very sensitive and singers always are, he can pull off so many things with his voice because of that. I asked him to do it in the studio, we went to Germany, and let magic sparks fly around. All of a sudden you are standing behind the window, look at Geoff, and get all those flashbacks, and he sang “Eyes of a Stranger”- he is such a nice person great sense of humor, working with him in one room was happy. He felt really happy and comfortable invincible and alchemy its a terrific powerful majestic and intimate vocal performance- he made a good song even better. Candice and Eric records in their own. in NY and SF eric is a natural wonder of the world as well.”

HJ- “Pre-order can take place now, what are some of your favorite formats you highly recommend fans to buy?”

Tobias- “The art book, I have been involved in these things personally, what would I want to have, and be proud to own and be happy to have it on the shelve to take it out feel it hold it look at it go through the pictures. I was involved in every little aspect I did a long interview by some questions even asked by fans, there is hand written stuff in there, over 100 pictures from the world of Avantasia.  Some photos from last tour from the recording process of this album as well as illustrations that give you the right mood and mind set.

To enjoy the music and its heavy huge book. Also the regular digi-pak I try to put a lot of love in every configuration- everyone is complaining about the music industry with the streaming music is losing its value, and no one has the chance to take the record from the store and looking at the content on your way home. I don’t think these things will be less valuable, I want to give people something great.”

HJ- “If you had to pick from the entire album what song would be your favorite?”

Tobias- “Well you know I am happy that I no not have to pick, I worked on it everyday, I love the entire album the first song is very special and different. It drags the listener into the world of Moonglow, very meatloaf, I do all the vocals no guest singer it drags the listener to a different world, gives you an idea. “

The new album titled Moonglow will be out on February 15th 2019, via Nuclear Blast Records. The album consists of multiple guest vocalist and is packed with melodies and vicious vocalist. Make sure to check out the European tour dates and selective U.S. sightings as well.