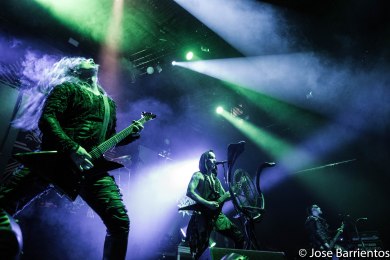 Behemoth, the blackened death metal purveyors have released their most brutal yet creative form of art. They released their titled album I Loved You At Your Darkest on October 5th, and they already hit number one in many countries globally. Their release came via Metal Blade Records and this is another furious act which will make it’s mark in the metal world.

Behemoth are known for composing aggressive blackened death metal, with anti-religion lyrics, in form of poetry, and this new album  I Loved You At Your Darkest is no exception to the continuous blasphemous sounds. Since their last release The Satanist, Behemoth changed their tone and created a more dramatic sound, which listeners can feel deep inside their core. The artwork alone is magnificent, with thy god falling, Nergal recreates the crucifixion and many other acts of what I would like to call the christ’s illusion. You will get blown away immediately with the intro, it is a powerful ominous entry, and the children as the choir make this record a worthy one to listen to. Of course you all have heard their two singles, “Wolves ov Siberia” and “God=Dog” which set the tone for what was coming forth. The fourth track on the album is “Ecclesia Diabolica Catholica” kicks in smoothly, and transitions into a maelstrom of riffs and Inferno destroying the drums. There is a malevolent riff that carries on the rhythm to this track, something of majestic transition it shows up multiple times allowing you to embellish the evil this song carries within.  The classical guitar that closes the song adds a perplex ending, one that soothes you non-the-less. Behemoth goes heavy with a darker tune titled “Bartzabel”, a dark demon who is known to be surrounded by a white aura, also known as the spirit of Mars. The invocation of this demon can be treacherous, and this song features both clean vocals and Nergal’s brutal growls. There is track after track filled with impeccable sounds, like on the track “If Crucifixion Was Not Enough”, the harmonics on this one are malevolent, conjuring a malediction with each lead (Seth), and rhythm (Nergal) meanwhile the bass by Orion is prominent on minute 1:40. All these sounds are bonded by the black forces as Inferno hammers away virulently. However the extreme sounds do not cease there, the middle part of the album seem to carry a heavy weight, uplifting black auras and blasphemous sounds that will instill euphoria with this deadly assault.

Half way through the record you stop and think, how this album just change the course of Behemoth, and perhaps set them up for record of the year. A virulent attack is unleashed immediately with the track “Angelvs XIII”, a near four minute track with clean vocals by a phenomenal choir, which adds darkness to the mayhem. The harmonics will simply floor you, a masterpiece wrapped with fury ready to chop your head off. The instrumentation that is a highlight in this album comes in “Sabbath Mater”, an arson ready to destroy all within reach. The guitars carry classic black metal riffs, with a touch of Inferno’s demolition on the drums. Orion’s bass is prominent in the entire song, while Nergal harrows your body with his potent vocals teaming up with Seth on lead guitar. It is definitely a song you wish it never ended, but all great things must come to an end. This album is simply an exposure of what Orion, Nergal, Inferno and Seth hide in their dark corners of their minds; a language which transcends barriers, and makes your arm follicles raise in excitement, disbelief (that someone can create such altering sound) and filled with expressions far beyond which the mind can comprehend. The epitome of blackened death metal, art in itself has been delivered in 12 blasphemous tracks which embody defamation of the Christ, yet beauty in each musical composition as it is extreme black metal. Get your copy of “I Loved You At Your Darkest” catch them live on the “” tour, dates are listed below.

One thought on “Behemoth, The Grander Scope”