The Black Dahlia Murder is doing a cross country tour with some of the heaviest bands in the metal community. Bands like Aversion Crown, directly from Australia and Fleshgod Apocalypse from Perugia, Italy are sweeping the nation. The House of Blues in Anaheim was a sold out show and metal heads attending did some neck damage as they relentlessly moshed and headbanged.

There is no other venue at the moment like the House of Blues of Anaheim, from its acoustics to lighting and open space, it is the perfect venue to see acts like Shadow of 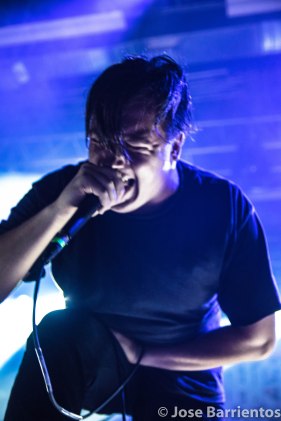 Intent, who can perform and leave fans in awe with their brutal symphonies paired with deadly metal sounds. The guys of this band have the power it requires to lift fans off their feet and make them mosh all night long. Their set was heavy, with breakdowns and brutal drum work by Matt Kohanowski, paired by the deep bass by Keith Kohlhepp. The Connecticut quartet delivered a mind blowing sound, specially when you hear Chris Wiseman on guitars and back up vocals. However, once you hear the deep gutturals by Ben Duerr, you realize the mosh pit will be a place where elbows will raise hell. The band has toured with bands like Whitechapel and Carnifex before, so this was not their first rodeo and left fans heads ringing.

The act that followed was Australian quartet and Nuclear Blast Records metal band Aversion Crown. The Aussies, have delivered a brutal assault in record format, live they are no exception to that word. They destroyed the House of Blues Stage with their sound. Mick, Mark Chris and Jayden have decapitating talent. Their fourth album is in the making, and they have given fans from California a taste of aggression they will long for in the years to come. 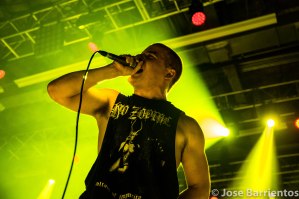 The vocals complement the drum blasts and guitar riffs that will make your head fall of your shoulders. A brutal scene was viewed on the mosh as fans raged and crowd surfed to their music. Make sure to check out their latest single “The Breeding Process” out now via Nuclear Blast Records.

Maestros of symphonic death metal, purveyors of requiems to our dreams took over the stage, and delivered what is known to date, the best performance anyone has ever seen live. Yes, Fleshgod Apocalypse are the Mozart’s of symphonic death metal. Francesco Paoli, on vocals and skillful guitar player delivered a majestic performance. Fleshgod Apocalypse took over the stage and made fans go static. Their amazing guitar solos delivered by Fabio Bartoletti synchronize to the whimsical piano orchestrations by Francesco Ferrini will leave you speechless. 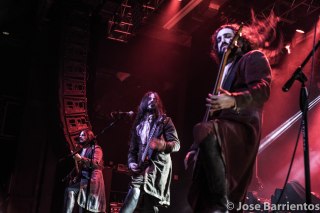 Fleshgod Apocalypse has a contagious energy and sound which will revive your soul, and guide you through the seven levels of hell in a trans. If you have seen them live you will know then that Veronica Bordacchini delivers potent opera vocals, which go hand to hand with the orchestrations and guitar solos. The drumming by David Folchitto sounds like explosive requiems, those that will sooth your dark soul and enamor all. Fleshgod Apocalypse stood tall on the stage, there was a moment when the entire crowd raised their horns, and the lights brighten, I knew then what Francesco Paoli meant. His pay out on a personal level was seeing the fans react to his music, and it was at that exact moment, his words resonated in my head. You cannot go with out hearing those clean vocals delivered by Paolo Rossi, who also delivers excruciating bass tones. The clean vocals give the music a “je ne sais quoi” feeling, which simply raises each hair follicle on your arms, including those behind your back. There is no other act like Fleshgod Apocalypse in the world, they have developed their godly sound and will continue to deliver magnificent music. From the first track “The Violation” until the second they all walk out of the stage, Fleshgod Apocalypse will entice you with their classical elements brought to life with guitars, drums, pianos opera vocals and the power of death metal.

Whitechapel took over the stage soon after Fleshgod Apocalypse playing their most brutal music yet. The fans raged and moshed as if it was the last show on earth. The band always delivers a brutal performance and provides the energy needed to spread fury across the venue. This band has toured with bands like Carnifex, and did a leg of the Mayhem fest, making them one of the last bands to perform in the last festival of that caliber. The band is well seasoned, and their performance on stage speaks for it self. 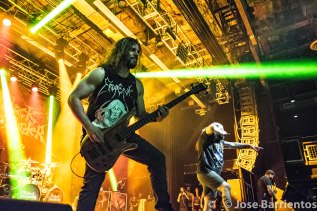 The headlining band of this tour is The Black Dahlia Murder, a dominating band in the melodic death metal department. With 8 albums on their belt, since the early 2000’s they have delivered skillful music with brutal taste in all lyrical form. Trevor Strnad is a versatile vocalist, going from low pitch gory vocals to deeper ones, and moves around the stage radiantly. The band recently released their most brutal album yet tilted, Nightbringers, a blunt to the head packed with melodic guitars and explosive drum work. The guitar talent is imminent by Brandon Ellis, who joined the band two years ago. He has become quiet popular in the new line up, as he delivers infuriating riffs and knee weakening solos. This guitarist will create whirlwinds as he executes songs like “Widowmaker” with ease and virtuosity. Max Lavelle on bass looks deep into fan’s eyes and slaps the bass with vigor and leaves a profound mark in their brains. As you hear the lead guitar shriek, you can also hear the melodies and rhythm created by talented and original guitarist Brian Eschbach. This gentle guitarist does not miss a beat, he slays those before him with gruesome speed, and attacks his fret board with anger and skill.

The band delivers a solid performance, each show they unleash their energy and metal gods skills. The catastrophic drum work is conjured by Alan Cassidy, who behind his throne hammers away relentlessly. There would be no depth with out this killer drummer, from double pedals to beat blasts, the cymbals also feel the love as Alan slams his sticks virulently. The Black Dahlia Murder exploded with energy and the fans crushed some skulls that night, as Nightbringers was performed. The night ended quick, but the delivery by The Black Dahlia Murder will last an eternity on those young metalheads.

The bands all delivered a memorable performance and they all left us with one question on our minds…When will we see them again?