The brutal Soulfly, headed and founded by legendary thrash metal master Max Cavalera are currently touring with support by Nile, the American extreme death metal Egyptian themed band. Both bands are unearthing the death with their powerful sounds, guitar solos and demonic growls. The National Grove of Anaheim was a mad house, and fans gathered to witnessed yet another decapitating show on Friday May 19th, 2018. 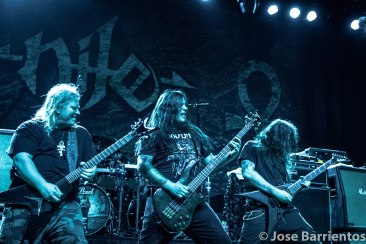 The stage was set as Nile took over it and demonstrated a powerful performance for those who love the brutal sounds. Headed by Karl Sanders, Nile exploited their guitars, playing songs like “What Should Not Be Unearthed”, a spinal shattering song which amped the fans. The pit was intense as Karl Sanders teamed up with the newly added guitarist Brian Kingsland as they shredded away with magnitude. Brian Kingsland demonstrated why he belongs with Nile, his quintessential skills dominated the stage enslaving those who witnessed it. Karl Sanders, the founder of the band would annihilate fans with his delivery of brutal vocals and guitar work. The master and creator of Nile exceeded himself during this performance. Relentless double pedals were projected by drummer George Kollias, who since 2004 has been dominating that throne. The powerful sounds would shake the walls of the venue, as fans ravaged the pit, Nile delivered an imminent attack on their senses. Brad Parris, current bassists also delivers excruciating vocals and potency on the bass.

Guitar solos were plenty, gory vocals were ominous as Nile delivered the track “Cast Down the Heretic”, a bone crushing song, which sounds diabolical live. The synchronization on guitars by Brian and Karl was flawless.The ensemble is in top shape, and the songs performed were the ones fans wanted to hear. Nile has released magnificent work such as Black Seeds of Vengeance and Annihilation of The Wicked all demonstrating a phenomenal repertoire of guitar riffs, Greek knowledge and explosive blast by the drummer George Kollias. Nile has toured with many acts, such as Fleshgod Apocalypse, and currently supporting Soulfly, they also made a devastating performance at the Summer Slaughter a couple of years ago. The band demonstrated why they are the masters of the extreme death metal scene. 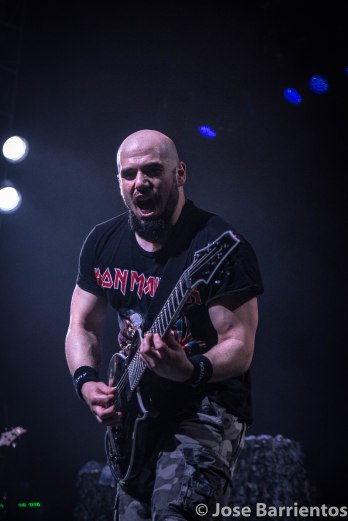 As the stage was prepared for the tribe to emerge, the fans chanted Soulfly, Soulfly!! Marc Rizzo propelled forward out of the shadows joined by Mike Leon, Zyon Cavalera and of course the legend Max Cavalera. The venue exploded with excitement and Soulfly crushed some skulls. It is undeniable the love fans have toward this band, they would chant to songs like “Jumpdafuckup” and raged to the beat of “Prophecy”. A young Zyon Cavalera rages through the set on drums, with out missing a beat, he hammered away. His career is getting started as he also plays with Lody Kong, but Soulfly was his focused that night. The kid is hungry and playing in the big leagues does not intimidate him, he destroys on set. Another energetic and master of his craft is Marc Rizzo. This guitar virtuoso delivers striking notes and furious solos. Jumping and interacting with the crowd this guitar master shredded away through songs like “Blood Fire War Hate” off their 2008 album Conquer. This song is fast, and necks spun as Max Cavalera exclaimed those four words violently, ‘Blood, Fire, War, Hate!’. With bassist Mike Leon doing back up vocals, each song had power, and instilled energy on fans as they moshed together. 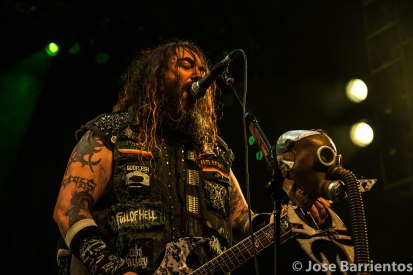 The inexplicable adrenaline rush one gets as you enter the pit allows fans to take hits and falls as they deliriously rejoice to the sounds of Soulfly. Towards the end of the set, Marc Rizzo delivered a majestic flamenco with his Spanish guitar. A beautiful designed guitar, yet more beautiful was the sound being emitted as Marc Rizzo played enchanting notes. Soulfly will continue to deliver a brutal performance across North America, the ensemble are currently working on a new album which should be out soon. We had a chat with Max Cavalera, make sure you check it out and find out more about the upcoming album.

With the rage inside, fans partied hard as Nile and Soulfly performed some of the metal world most brutal work so far. Guitars were on fire as each performer demonstrated their talent and played magnificently. The masters on drums exploited their drum sets to their professional ability and relentlessly conquered their throne. Meanwhile the bassist and vocalist ravaged the minds of those witnessing this spectacle. Nile and Soulfly are two acts you must watch perform live.