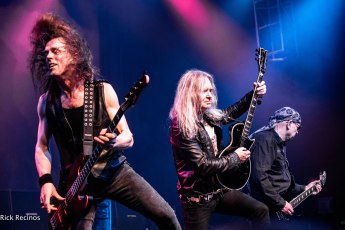 Saxon legendary heavy metal outfit from England is has currently release their newest addition to the record collection, titled Thunderbolt. With that in mind, the gents were ready to tour the world, and they have conquered selected locations side by side with Judas Priest. However, on April 20th, 2018 they side tracked to do a more personal headlining show at the Grove of Anaheim. The venue where many heavy metal acts play was filled with metal heads lovers of this New Wave of British Heavy Metal band.

The heavy metal band, Saxon almost shook the walls off the Grove in Anaheim down with their powerful heavy sound. They instilled so much power in metal heads bodies to headband as they experience such potency. They performed classic songs from Motorcycle Man to new songs from their newest album Thunderbolt. Not only did they play amazing songs but they were incredible to watch. Biff Byford’s vocals echoed throughout the venue and he always kept the audience engaged.Nibbs Carter head banged throughout the entire set, and his fingers danced all around the fretboard of his bass. Then of course, the duo Doug Scarrat and Paul Quinn’s guitars were just ineffable. Each solo being almost better than the last, left the audience in awe. Then last but not least, Nigel Glockler’s drums just completely annihilated the crowd.  Nigel Glocker did not miss one beat and his  ferocious drum solo was astonishing.

After years of playing metal, it is usually noticed that most bands just get tired and a little lazy on stage. However,  Saxon completely disproved that for the audience at the Grove of Anaheim. They still enjoy playing live, making each and every performance unforgettable for their fans. Saxon surprised the fans with two encores instead of one! Their encore included the legendary tracks titled,  “Denim and Leather”, “Heavy Metal Thunder” and “Wheels of Steel”. Even after the amazing encores, everyone wanted to hear more. Saxon continues their trek with Judas Priest on this support of their recent release Thunderbolt via Silver Lining Music. Make sure to get your copy of their potent heavy metal release now.