A legendary guitar player, Doyle Wolfgang Von Frankenstein came and destroyed the historic Whisky A Go Go on Sunday March 11th. He recently released his sophomore record As We Die via his own Monsterman Record Label with his band Doyle. Fronted by Alex Story, this quartet wrecks stages everywhere they go. With more sold out shows than imagined in this As We Die World Abomination Tour, they will continue to fuck shit up across America heading to the UK and Russia soon after.

The set performed by Doyle, was anything but dull, with the energy conveyed toward fans of the obscure, the band played songs from their first album (Abominator) and second album (As We Die) only. For those anticipating to hear some Misfit songs, well this is noting but Doyle, a catastrophic and compelling explosion of music. Doyle goes on the  stage with a monstrous persona, with vegan corpse paint on, he delivered a marvelous performance. Doyle instills fury in spectators minds, as he picks his guitar with aggression pacing back and forth on the stage interacting with the devious fans. Fans, who with savagery moshed all night long. The Whisky A Go Go had no chance as this band delivered amazing sounds. Brandon Pertzborn hammers away, as fans get plummeted by his destructive drum work. With Brandon Strate on bass, the hellish sounds are unleashed heavier and add depth to what already is a maelstrom of music. Doyle counts with one vocalist, and that is Alex Story, seducing the crowd with his lunatic persona, and swaying his hips side to side as he comments “This next song is a love song… you can dance to it if you want to…” the crowd listens in awe. You know your body will be wrecked as all the sounds come together and this quarter performs the best aggressive sounds of evil.

With this sold out show, Doyle enamored those who seek an aggressive sound, and “As We Die” is that go to album which will blow your mind. The energy Doyle has as he performs is insatiable, there is a disturbing melody played live and that is the sounds of this incarnation of evil. If you have yet to see Doyle live, or have not yet bought the new album “As We Die”, I recommend you stop reading this and head over to the closest record store, because guess what streaming platforms will not have such a destructive sound. Head over to Monsterman Record Label and get your copy. In the mean time take a listen to our interview with Doyle, even that alone gave me a near nervous meltdown. 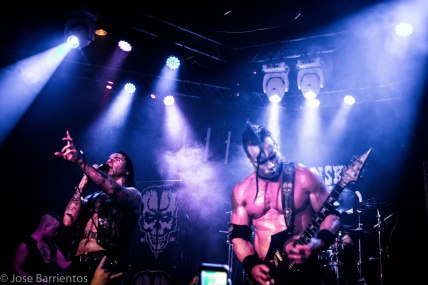