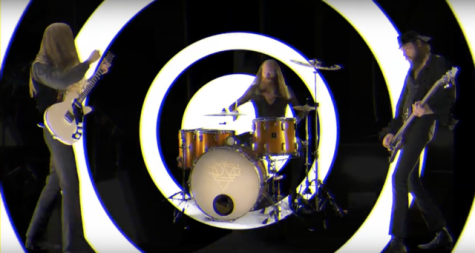 Kadavar just released their heavy hard rock album titled “Rough Times”, and it is powerful. From fears, to many other issues Kadavar rocks out with amazing talent. Check out this interview with the band.

Rockbrary- “Your new album “Rough Times” drops this coming Friday via nuclear blast records, what emotions go through your mind as the release day approaches?”

Kadavar- “It increases with everyday, I am stressed, all this work is ahead of us. I’m very excited because I want to see the fans reactions. All this work makes me proud, what we’ve done this years is a mile stone for our career, we built an entire recording studio. 2017 was dedicated to making this record. Looking forward to the release date.”

Rockbrary- “This album’s title is on point based on the times we as humanity are going through, with catastrophes, wars, attacks on innocent people etc, are any songs from this record political?”

Kadavar- “It is a little complicated, generally, the record to me at least, is about emotions, living in those times. A lot of weird shit is going on, it makes us feel uncomfortable even if they are not all political; its… is something that is there. Like “Tribulation Nation”, is straight up political, a dystopia vision of the world. In those times you are afraid of things that might happen, but have not yet.

Every song does the job in the context and all together works better than any stand alone song. I like playing “Into the Wormhole”, it has a heavier sound. Super slow guitar and heavy. One of my favorite tracks, it has an 80’s vampire sound, there is connection to our older records.”

Rockbrary- “You mentioned that you were going through some rough times, hence the title, but at more deeper personal level, can you say people will read that off the music alone?”

Kadavar- “If you really listen closely, there is depression, anger, fear, being alone and not having a clue of how to make your self feel better. If you listen to the lyrics, I’m a sure that it is obvious that it is dark.

We are really excited to go on tour, and experience how the new songs are going to be accepted.”

Rockbrary- “What was the recording process like in terms of time in the studio recording and out of the studio writing?”

Kadavar- “We wrote the entire record, did the demo, and re-recording in May. It took some time to write and demo the songs, about two months, we recorded it in ten days. This time we rehearsed a lot before then we hammered it in 3 takes.”

Rockbrary- “You released an exclusive 7’’ vinyl for your first single containing a cover of The Beatles – “Helter Skelter”, why did you decide on covering that song?”

Kadavar- “I am personally a big Beatles fan, the biggest I, know the biggest in the group- We have been playing it live for sometime since 2016, at the end of our last tour, it’s a special “Helter Skelter” song. This song has a low fi since the 70’s so many crazy things going on, how dirty and raw it is. there was a connection to Kadavar, we like to be raw and brutal.”

Rockbrary- “In terms of touring, with our mockery of so call president, do you think that might affect your traveling to the US for future tours?”

Kadavar- “It had not been a problem before, I think we did the process, no trouble and I assume it is going to be the same the next time. You can always have someone that will create trouble, it happened once in northern Texas with a couple of policemen that wanted to give us a hard time. They stopped us for five hours, looking for drugs, we had none. No troubles in the states, not immigrating at least. We supported The Sword it was really fun with all the guys. I hope we can come back next year.”

Rockbrary- “In terms of sound, are you guys experimenting with evolving into something else, or as many favorite you just played what Cadaver knows best, rock and roll?”

Kadavar- “We change a lot of things, but there are couple things we don’t. We play everything live and play it as good as we can but we don’t do much editing. I think its important to keep that same attitude as live. Even if we engineer different some things just great.

There are bands who suits better to produce more and have a different sound, but it never worked for us, we knew from the beginning that we wanted to keep that raw sound.”

The sound of Kadavar is heavy, and their new record titled- “Rough Times” is powerful. The band is a mixture of blues, heavy doom and groovy metal all packed in one, and their sound will floor you. Make sure to get your copy of this groovy album out now via Nuclear Blast Records.