American guitarist, Marty Friedman, and his band conquered North America with their contagious music and onstage performance. In support of this tour Scale The Summit delivered some progressive licks, while The Fine Constant shredded away.  Not only is Marty Friedman a multitalented guitar player but he is very well known in Japan, from appearing in many Japan television shows, to being appointed a  Japanese Heritage Ambassador to promote the country’s upcoming Olympic games. Marty Friedman recently released his devastating record titled Wall of Sound and it is a riveting composition of instrumental metal.

On August 27th, 2017 Marty Friedman played a quaint show at The Parish in the House of Blues of Anaheim; it was stellar. The set kicked off with and intro riff merging into “Hyper Room” out of his 2015 album Inferno and they made sure the fans raged with this upbeat metal track. The set was blazing as Kiyoshi the aggressive and talented basis player entered a trans which the fans fed off.

Kiyoshi Manii has got to be one of the fastest female bassist, she delivers a vivacious performance and interacts with fans as she explodes with energy. The bands drummer Chargeeee is ravenous and enjoys pointing his sticks at fans that make eye contact with him. Chargeeee is the touring drummer and he delivers a exhilarating performance. With each drum hit, his body is fully devoted and headbangs to each drum blast. As a track ends, he rises and yells Japanese words to the audience, as if he is taunting them, challenging them to join him and rage on at the floor on the next track. The newest addition to Marty Friedman’s band is Jordan Ziff, this guitarist can definitely keep up with Marty Friedman on stage as they both deliver guitar solos face to face. The up and coming rockstar adds heavy rhythm guitars and then rips into astonishing guitar solos with ease. Imagine Tommy Lee Jones, with the energy of a teenager, who wants to savage the drums and exude that energy that grows within; a very talented drummer. On center stage the legend, Marty Friedman delivers a virtuoso act, shredding from minute one until the end of the show. 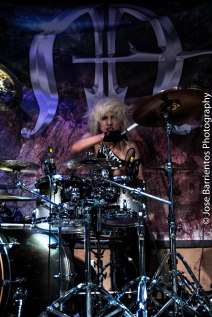 The legend, guitar god Marty Friedman set the stage on fire with his intense riffs and melodic solos. Marty Friedman plays in a majestic way, each guitar strum take your breath away. His Jackson guitar surely does not complain, as Marty circle pick sweeps and hammers notes that seem to be outlandish; fans do not blink an eye. Marty Friedman played two new songs off Wall of Sound, one being our personal favorite, “Whiteworm” and the second one, the opening track  “Self Pollution”. The track “Whiteworm” starts with a progressive riff, soon after it breaks into a latin style music, Marty said the following about that part- “ its a semi latin sound I put in there. It comes from many experiences that I had in the last two years playing with latin musicians. I played with Rodrigo and Gabriela at the Hollywood Bowl, and played in Argentina; it’s a latin sound that I kind of stuck it in my music in a weird way.” The talented musician dug in to other sounds to make his album more compelling, and interesting as he enjoys making music the best out there. Marty Friedman teased the fans by playing “Tornado of Souls”, a track off Rust in Peace, a masterpiece he composed during his years with Megadeth. The fans enjoyed that section, however as Marty kept shredding fans would stand there astonished by his magic. Marty pick sweeps, hammers and pulls, but one interesting technique is him strumming the guitar with his pick, then doing it with his finger on the higher strings adding an immediate note allowing the track to be fluid and have more impact. His skills are unmatched and the bands vivid chemistry will awaken your soul. Marty Friedman last show was in San Diego, and they definitely will be thinking of touring the states again. As for now, back to Japan to continue his tantalizing career and creating more inspirational music.