Gruesome collects their inspiration and sound from death, the main topic of their debut album, Savage Land (April 2015, via Relapse Records) and their new killer runner up Dimensions of Horror via Relapse Records. The late 80’s and early 90’s death metal movement in Florida was brutal and silenced a bit, but a couple decades later bands kept their sound and are rising once more. We spoke to Matt Harvey lead guitarist and vocalist of Gruesome to get a glimpse on the new album, Dimensions of Horror, the metal scene, touring and much more. Check out what Matt insight was: 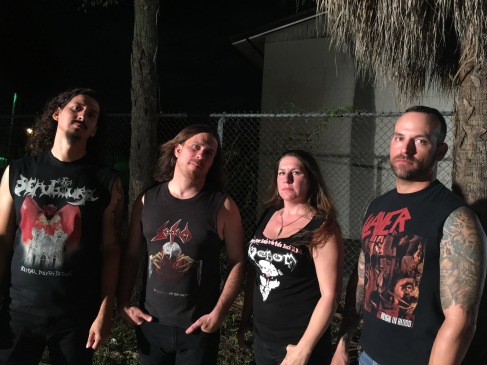 Hostile Jo: “First off, thank you for taking the time to interview with us at Rockbrary.com and letting us in the Gruesome world.”

Rockbrary: “Why did you decide to keep writing death metal with the classic sound of Leprosy and Malevolent creation?”

Matt Harvey: “It came out of the Death to All tour. I did the mini tour as the lead singer and guitar, after that we got busy touring with Exhumed my other band. We ended all working with Exhumed and thats where I met Gus. We played songs like “Torn Into Pieces” and “Born dead”.  We were just hanging out drinking some brews and at one point (drunk) we talked about possibly starting a band influenced by Death. It was all drunk talk, so i figured perhaps it will lead somewhere or not, either way I decided to write some songs for what is now Gruesome.

I was hanging out at my wife’s house in England, I was jet lagged and was just writing songs. I said, why not write a song and see what happens? Gus liked it and we moved forward.  Then, the idea was just to write our own Death homage album. As far as the super group i think it sounds silly. When you are a musician, most of your friends are all musicians and we all just decide to get together and play some death inspired music.”

HJ: “Do you feel that metal and death metal sound is dying as metal evolves?”

MH: “It really has survived a lot better than i thought when I was 14. I would have said yea right, death metal has been important in helping metal evolve,  bands like slipknot, and other bands that are big now. Genres like metal core was created but there are a lot of bands that are playing the old style early 90’s a lot of it seems like its focused in the Swedish sound. It’s the nostalgia people hear a new album from an old band and they take out their old music and the movement resurfaces. There is a  difference, because they both have been around, and since the die off has not been severe, it all moves in cycles, anything that will come back around.its the same thing with movies, like the new Jurassic Park movie, the fans who saw the original are going to get excited for the new movie.

HJ: “When you signed with Relapse Records, Savage land was released, and what a great debut album. The second album was Dimensions of Horror which to me is the runner up, how are you going to top this furious record?”

MH: “Because we are focused on death as really is our only influence, we have a road map laid out and look at how Death developed. we are half way through writing another record, its more of a spiritual healing. We have a bit of a road map, because Chuck has done it before and we are Death inspired band.”

HJ: “When are you planning on touring in support of Dimensions of Horror?”

MH: “We have a short tour in August, where we are going to hit Florida and California, the only places that are not festivals. We go to Europe to do some shows, some with Exodus and the last day is in Puerto Rico, I have never gone to Puerto Rico so I’m very excited to play there.”

HJ: “You have toured plenty, are shorter tours better?”

MH: “ It depends, it takes weeks to get really good, after four weeks we get burned out. I did those tours with Exhumed and after a while you are tired, burnt out and it just takes a toll on you. I rather do shorter tours 2-4 weeks at most.”

HJ: “Why did you record in Florida and not In California?”

MH: “It works easier, Dan and Gus are audio engineers, they are able to facilitate the process since all their gear is in Florida. Gary- lives in Orlando it’s a very Florida based album, plus it revolves around the Florida Death Metal scene.”

HJ: “Now the video to Dimensions of Horror is more like a scene from a horror movie, are you a fan of horror movies and what are your top three favorite movies?”

MH: “Reanimator,  Evil Dead 2,  Gates to Hell- I liked horror movies since before I got into death metal, then I realized it was all about horror, some songs by Death were about horror classic movies, and it inspired us to write about that for this album.  The song “Raped by Darkness” is about Evil Dead, how she is possessed by the demons and is therefore raped by the darkness. Another tune that we dig is “Seven Doors” that correlates to Hell Raiser, think about it all gates are opened to different levels of hell, therefore its titled “Seven Doors”.” 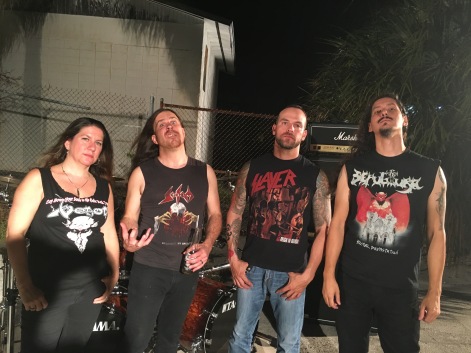 “HJ: “Taken that you write about horror, and death is obviously the biggest inspiration for the band, it is known that metal has a variety of topics like history and events, or even real serial killers what is it that you think keeps metal alive?”

MH: “Metal in general its not about hot chicks and sex, there is such a wide variety of topics that talk about cults, religions greek, history. it has always been great to talk about other subject matters, horror sic fi history, not just your basic girl meets boy.”

HJ: “Once again, we thank you for your time and lets keep that Gruesome sound alive cant wait to see you guys live.”

MH: “Thank you, and we appreciate the chat.”

As a death metal lover, the Florida Death metal is definitely the true classic American Death metal. The sound of the guitars isa combination of thrash metal with that intricate scale punch adding the heavy drums and death lyrics. Matt Harvey is giving the metal scene the reincarnation of evil, and pure putrefaction with songs like “Rape By Darkness” and “Hellbound”. Get a glimpse of their brutal assault and get their album, if you  love the classic sound of death metal and all things horror make sure you catch this killer band while they are in their prime. Remember keep the metal alive as these metal ghouls are reincarnating the grotesque.

2 thoughts on “Matt Harvey of Gruesome: Talks Death, Touring and How Gruesome came about.”