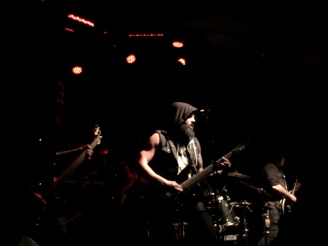 There is Black Metal straight from The U.S. and its aggressive, dark and deadly. Bands like Miscreancy, Carach Angren, and Abigail Williams are taking the black metal scene by the head. Miscreancy is a mixture of Black Metal, Death metal hammering, and folk metal themes. Their influence can be rooted in bands like Dissection and  the drummer who constantly blasts those cannons adds a diabolical gory voice to the dark atmosphere this band executes. The guitar solos are perfectly performed as the headbangers below the stage mosh and admire this band’s musicianship. Songs like “Reflections of The Impaled” and “Lifeless Depths” reminded fans at the Whiskey A Go Go not to forget about this genre. The speed on the bass and drumming was very well synchronized and with as little vocals as this band has, they still destroyed the stage. Another act in the black metal scene is Carach Angren, you can definitely hear their influence of bands like Emperor, and Mayhem. Their macabre songs can be heavy, with blasting guitar riffs, and orchestra sounds added to their sound. The vocals can remind you of Shagrath of Dimmu Borgir more appeal to the bands sound. This band is pure black metal in its truest form, from satan profaned songs to eery atmospheric sounds. 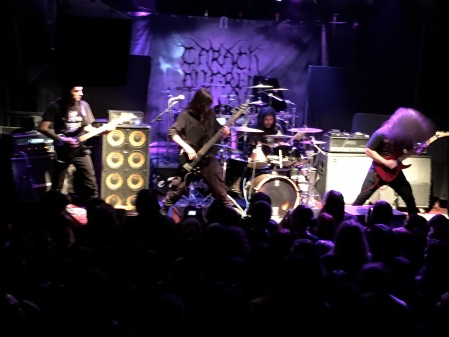 The double pedals are mastered and satan can proudly claim this band in his burning pits of hell. Black Metal is the music of the Norwegian realm, however these bands have adopted this sound skillfully. North America has definitely been welding American black metal and the Netherlands is not falling behind. Carach Angren comes straight from the Netherlands playing horror songs. Songs that very much remind you of an Edgar Allan Poe horror story, depicting scenes and instilling euphoria to those who love this genre. Each song by Carach Angren is full of cannon blasts, horrific symphonic hymns and chilling vocals. Their release of ‘This Is No Fairytale’ will definitely propel them forward in this tour.  Abigail Williams was another band that created mayhem that night, February 22nd at the Whiskey A Go Go. Their sounds reminds you of and early Emperor, filled with heavy rhythmic riffs. Songs like “Of The Outer Darkness” are a disharmony of classic black metal. The darkness is written all over this band, as they take the stage and ensue that catatonic sound, the sound of Black Metal. You can find all this bands on Spotify, catch them touring with Fleshgod Apocalypse and of course get their physical copies online or record stores. Black metal had been a long forgotten sound, and rising from the crypts this genre once more is taking its victims souls. Let the vault of metal expand and fans recognition of these bands be shown.