Music would not exist without the creation of majestic instruments, and these would not function with out its empirical parts, from strings, to the screws on the drumheads. However, Those instruments would need someone to give them life and sound, who else better than a creative person willing to change the world with music and determination. There is a place for those who contribute to the world of music, those whose countless hours of practice are acknowledged by fans and admired. That place is NAMM, National Association of Music Merchants, where the latest gear is revealed and artists showcase such gems. Big brands like Pearl, ESP, Fender, Jackson and Marshall all showcase their most precious gems during this convention for buyers and distributors and it’s a maze of booths with shiny new toys at every turn of your head. The venue was the Anaheim Convention Center, where you can hear trumpets, drums, electric guitars, and bass guitars being tested.

However, this is where the realm of metal coexists with the rest of society. That’s right, metal heads form all over the country fly in to witness the unveiling of new gear, but most importantly the sighting of rock stars like Max Cavalera, David Ellefson, among the many that showcased an instrument or signed photos for fans.

As you enter the monumental Anaheim Convention Center, all you see is hundreds of people seeking for the booth to start appreciating the art of instruments. Aisle after aisle you can see the manufacturers and sales representative waiting for the buyers. As you pass them by, you walk to the booth where the famous will shred or blast those cannons, you end up on the Fishman booth anxiously waiting for Russ Parrish (Satchel) of Steel Panther to amaze you with his skill. Prior to Russ Parrish you witness Greg Koch, not Stone’s Brewing CEO we are talking about Kreg Koch the guitar virtuoso recognized by Steve Vai. This guitarist is anything but shy with the guitar, his skills are technical and he has a great ability to finger pick those strings and make that guitar tell unsung stories. With his blues and funky playing style, Kreg Koch captured the fans and earned some new ones.

Followed by this capsizing act, was Russ Parrish, showcasing the Fishman Fluence Multi-Voice Electric Guitar Pickups. Russ Parrish also allowed fans of the crowd to play with his guitar. Some of those fans were shredding like rock stars, surprising Russ as well as the crowd, there is definitely growing talent in the guitar world. There are guitars of all makes, from amazing acoustic designs to breath taking electric ones.

Halls filled with that wooden scent, and the sound of those strings being picked at is heaven on earth. The Sharp edges of the electric guitar with a shining coat to protect

the paint is a powerful sighting, as the distortion takes over your hearing, you pinch yourself to ensure it’s not a dream. In front of you, a longhaired heavy metal master turns those knobs to 10 and the amp to max warning you of an electrifying sound to be played.

Bill Hudson of the Trans-Siberian Orchestra tour performed at the ESP guitar room. This guitar master performed a riveting song titled “Paco”, dedicated to his Chihuahua where he furiously demonstrated his ability to create amazing guitar licks. Bill Hudson has contributed with Cellador on their debut album, Circle II Circle and Savatage. With all that experience up his sleeve, he will be making some noise in the future of metal. Down the corridors of NAMM, we met up with Angel Vivaldi; this instrumental metal master did a quick clinic session at the Dunlop booth, which was captivating and skillfully performed. Angel Vivaldi performed “An Erisian Autumn” passionately showcasing his skillful licks as well as the song titled “A Martian Winter”. At the end of this performance the audience salute him and were truly enamored with Angel’s skills. Down the hall at the Legator Guitars booth, Michael Stancel of Allegaeon showcased the Ninja 350-PRO 7 String Guitar with Floyd Rose Tremolo. This death metal master can shred and creates fast, heavy and rhythmical riffs that will make your skin crawl. His clinical session with Legator Guitars was like having a small concert in front of you, live and furious, the only missing element was a mosh pit. In this session he performed the song titled “Dyson Sphere” form their most recent album Elements of the Infinite. NAMM was the perfect place for artists to unveil their new signature guitars. 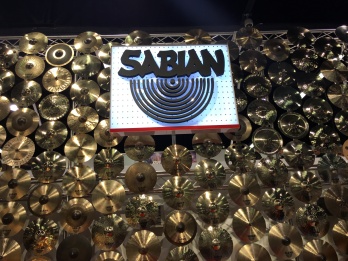 The market wants to see the newest gear, and fans want to see their favorite artist’s new ax or drum set, at NAMM there was no shortage of new signature instruments.

Gary’s Blood was the medium

Gary Holt, of Exodus and now full time member of Slayer unveiled a one of a kind guitar. No other brand would partner up with Gary to fulfill his insane, yet amazing idea- to create a guitar with artwork using his own blood. Gary Holt was beyond excited as he had finished his shredding session, he was about to see the guitar masterpiece done with his own blood and for first time he had laid eyes on it. Prior to that, Gary answered some questions from the audience as he also played some amazing riffs.  Check out the videos on our YouTube channel. There were signings and appearances from artist like David Ellefson, Chris Broderick, Andreas Kisser, and Phil Demmel at the Jackson booth.

Schecter Guitars had Zack Wylde releasing his new Odin signature guitar and signed autographs for his fans. Meanwhile at the Seymour Duncan booth, Yngwie Malsmteen did an appearance as well and that line was massive. Among the famous rock stars, there is always he who supports this amazing music, the one and only Jose Mangin was at the Dean Guitars room interviewing Dave Mustaine and many other guitar gods. At the S.I.T Strings Co. booth we had the pleasure of meeting Max Cavalera, Michael Leon of Soulfly, Meggs Rascon of Coal Chamber, along with two very talented musicians of Devil Driver– Mike Spreitzer and Neal Tiemann. They were all surprised when they signed our old laptop, Neal Tiemann asked, “How old is this thing?” While Michael Leon said it was the weirdest thing he had ever signed. Well at least it wasn’t a baby, but this convention definitely was loaded with amazing talent, from the sculpting of symbals to the craftsmanship of guitar paintings with human blood. Only in the world of metal do we hear of such daring yet creative ideas.

Check out our Gallery for more images.