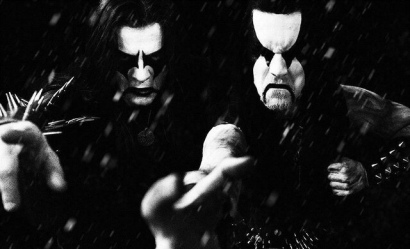 A total of 4:26 minutes of pure chaos. Rightfully titled, “Northern Chaos Gods”, Immortal has unleashed a catastrophic new single. The album is set to be released on July 6th, via Nuclear Blast Records. The line up Demonaz (vocals, guitars) Horgh (drums) Peter Tägtgren (session bass) ravage the you with this brutal song. There is no doubt that Immortal remains strong regardless of the line up changes.

With rabid furor, teeth-baring aggression and an eerie cold that crawls deep into the very bones of the listener after only a few unrelenting seconds, IMMORTAL is about to erect a new superior kingdom of frost on top of their existing legacy. The song ‘Northern Chaos Gods’ consequently, holds the very essence of IMMORTAL; a distillate of grimness that will once again heave the band onto the ice throne of Norwegian black metal.

“IMMORTAL delivers! This is a majestic comeback that will impress old and new fans!”
SCREAM (NO), Stig Odegaard

“AMAZING! The marriage between “Pure Holocaust” and “At the Heart Of Winter”.
ROCK HARD (IT), Nicola Vitale

Save your copy here: http://nblast.de/ImmortalNCG

In addition, very limited 7” vinyl singles of the title track ‘Northern Chaos Gods’ will be out on May 25th – the red vinyl is already sold out, but black and white are still available, here:
http://nblast.de/ImmortalNCGSingle