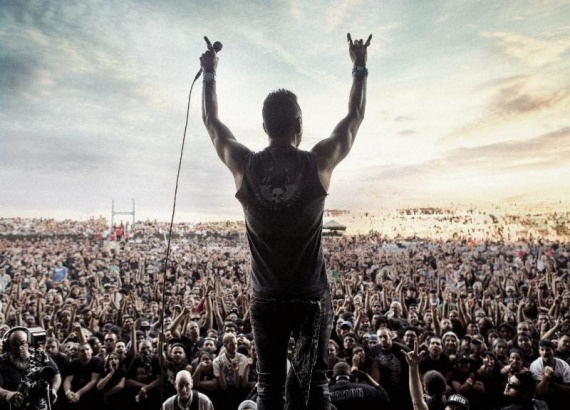 DevilDriver/Coal Chamber frontman Dez Fafara announced the launch of The Oracle Management with his wife, Vice President/COO Anahstasia Fafara, last year. Since then, the team has quickly built a stellar roster comprised of musicians, bands, producers and beyond. Now, The Oracle Managementis adding an entertainment industry icon to their midst – welcoming award-winning SiriusXM pioneer, television and event host, business owner and heavy metal jack-of-all-trades Jose Mangin to their growing roster.

“It is with great pleasure that we welcome the Mangin family to The Oracle Management,” says Anahstasia Fafara. “Jose has always been family to Dez and myself, so when the opportunity arose for The Oracle Management to be the first management team he’s ever hired, we knew we were the ones that could move the needle for this multi-talented, multi-faceted entrepreneur that has partnerships with many brands, and is also the voice of a generation on SiriusXM. He’s also one of the longest standing programmers and personalities at SiriusXM radio! We are looking forward to growing Jose and his brands and are dedicated to the task of taking him to new heights within his various fields. We want to break new ground for this established personality and celebrity.”

“It’s an extreme honor to finally have a killer team supporting me on my quest to becoming the Mexican version of Ryan Seacrest! Seriously though, I have a lot to offer the world, and up until now I haven’t been able to check mark the stuff in life that I want to achieve because it’s only been me,” says Jose Mangin. “The Oracle Management team is laser focused on their clients, and I know that they will push and steer me in the direction towards more successes in and out of music. They’re long time family friends and I have a ton of respect for how much they love me and my girls, so I know they’re going to take great care of us. I’ve been very blessed in life to do the things I’ve been able to do, and now it’s time for me and my team to capitalize on that, and with positivity, determination and hard work, we can kick some major ass together!”

Jose Mangin has not only been with SiriusXM for 18 years, he was the very first rock voice heard on U.S. satellite radio, and balances the current positions of Director of Music Programming and main on-air host (Liquid Metal and Octane). During his time at SiriusXM, Jose has more than proven his worth as a major tastemaker – breaking bands like DevilDriver, Coal Chamber, Volbeat, Hellyeah, In This Moment, Twelve Foot Ninja, and others. Jose is by far one of the busiest people in heavy metal – in addition to his work with SiriusXM, Jose is the official emcee for many major rock festivals nationwide, including Rock On The Range, Chicago Open Air, Ozzfest Meets Knotfest, Carolina Rebellion, Fort Rock, Welcome To Rockville, and more, and emceed many festivals that have since ended their tenures. Jose is an 11-year brand ambassador and the current Vice President for Affliction Clothing, co-owns a premium tequila company, Riazul, hosts several music specials, concert events, award shows and more on AXS TV, and co-produces and hosts the “Dudes Talking Sh*t In A Truck” video series with Zippo (2017 – present).

Jose made major moves in the industry as the host of Headbangers Ball on MTV2 and MTV2.com for four years (2008-2012), and host of the nationally syndicated Latino news magazine TV show LatiNation on in over 100 major Latino markets for over eight years. He also hosted the 2016 Revolver Music Awards with Dave Mustaine from Megadeth. Jose has been celebrated as a recipient of Revolver’s “Most Metal Man Alive” Award in 2014, was a two-time guest on the Howard Stern show, has been featured on the cover of OC Weekly in Orange County, CA and in INKED Magazine’s “Inked People”, and currently holds sponsorships from Modelo, California Finest, G-Pen, Dean Guitars, DDrum, QSC, Roland, and Monster Energy Drink.

Jose’s future endeavors include presenting, curating and hosting his own festival starting in 2019 in his hometown of Phoenix, AZ. In addition, Jose is currently expanding his footprint in the entertainment industry with acting opportunities. He took a year of horror acting classes in New York City, learning how to die on camera with hopes of landing a role in a horror film – his favorite movie genre.

Jose graduated with a degree in Chemistry from University of Arizona and attended graduate school at the University of Tennessee College of Pharmacy. Utilizing his background in science, Jose created “Headbang For Science” – a non-profit scholarship fund for metalheads wanting to pursue a career in science and/or medicine. Jose currently resides in Southern California with his Heavy Metal family – consisting of two teenage cheerleading daughters and his gorgeous wife of 17 years, Melissa Mangin, who is one of the country’s top District Managers for Victoria’s Secret and PINK.

About The Oracle Management:

Founded in March 2017 by husband and wife of 20 years, Dez (DevilDriver, Coal Chamber) and Anahstasia Fafara, The Oracle Management is a company powered by passion, honesty, integrity and a militant devotion to the creative arts. Two eternal goth kids united by love, for each other and for the music that brought them together, Dez and Anahstasia are poised to provide a much-needed burst of clarity and focus in a confused and unstable music world.

In addition to Jose Mangin, The Oracle Management also represents DevilDriver, Ross Robinson, Amigo the Devil, Combichrist,Wednesday13, The 69 Eyes, Jyrki 69,and Sumo Cyco.The Oracle Management is also the umbrella company for many of Dez Fafara’sother lifestyle brands, such as SunCult Surf/Skate and apparel for the subculture. For band submissions and more information, emailinfo@theoraclemgmt.com or visit www.theoraclemanagement.com.