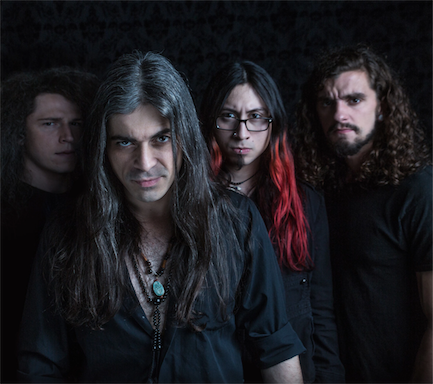 The Texas-based “super metal” quartet IMMORTAL GUARDIAN – whose founding member, Gabriel Guardian, has earned extensive notoriety for his ability to shred on guitar and keyboard simultaneously – has signed with M-Theory Audio.
Hailing from the same state as guitar greats Dimebag Darrell and Stevie Ray Vaughan, IMMORTAL GUARDIAN proudly fly the flag of musical innovation and virtuosity for the Lone Star State. Over the past few years, the group has released two acclaimed EPs, “Revolution Part I” (produced by Roy Z of Halford/Bruce Dickinson fame) and “Super Metal: Edition Z,” that showcased a full-frontal metal assault of anthemic melodies, technical rhythms, furious shred and high-flying vocals by Brazilian singer Carlos Zema (Outworld).
In support of their EPs, the group has made jaws drop on stages in not only their home state – where they’ve performed alongside some of the biggest names in metal, including Judas Priest, Dragonforce, Kamelot, Symphony X, Sonata Arctica, Slayer, Metal Church, Soilwork and Steve Vai – but also abroad in countries such as Brazil and Russia, and during high-profile performances at ESPN’s X Games, South By Southwest and the Fun Fun Fun Fest. Live footage shot during the band’s SXSW showcase last month can be viewed here–>
In addition, Gabriel Guardian has developed an extensive following on YouTube, where his unique dual-instrument covers of classics by the likes of Iron Maiden, Pantera and Guns N’ Roses have garnered hundreds of thousands of views. His virtuosity was also recently showcased on the MTV program “Amazingness” (watch a clip here). This summer, Gabriel will tour North America extensively as a guest member of video game metal icons PowerGlove. The tour includes a stop at Austin’s Come and Take It Live in August, where IMMORTAL GUARDIAN will also perform.
“At NAMM a couple years back, I met Gabriel and his manager Brett through the Exmortus and Havok guys. I was immediately caught off-guard by someone who could shred on two instruments at once and have eyed IMMORTAL GUARDIAN ever since,” explains label founder Marco Barbieri. “With M-Theory Audio in place and the band finalizing a new record the time is now and I’m pleased to make the announcement and work with such gifted musicians and join their creative team to spread the word.”
“I’m very happy to announce IMMORTAL GUARDIAN’s signing with M-Theory Audio and the start of our next epic chapter,” Gabriel says. “Marco Barbieri and his team have been accumulating a serious roster, and with a track record like his, we are definitely honored to be joining the family. Looking forward to all the good times ahead!”
More information on the new IMMORTAL GUARDIAN album will be revealed in the coming months.
IMMORTAL GUARDIAN is:
Carlos Zema – Vocals
Gabriel Guardian – Guitar/Keyboard
Cody Gilliand – Drums
Thad Stevens – Bass
For More Information:
www.ImmortalGuardian.net
www.GabrielGuardian.com
https://www.facebook.com/igmetal
https://www.facebook.com/gabrielguardianmusic
www.m-theoryaudio.com