Southern California locals, Thrown Into Exile are ravaging stages with their brutal sounds of pure metal. The creative minds of guitarist Ray Sanchez, a Northern California native and Mario Rubio of the Southern region of California have reacted to their influences by classic acts like Sepultura, Megadeth and such. They have constructed a style that will resonate in centuries to come with their work on Safe Inside, which is a testament to the metal community. This band together with, Scott Shelko, on drums and Dave Corsile on bass  has toured on festivals of prestige and weight, like Ozzfest Meets Knotfest, and trekked across California in venues like The Resident, and their coming show at The Belasco warming up the stage for Iced Earth on March 8th. 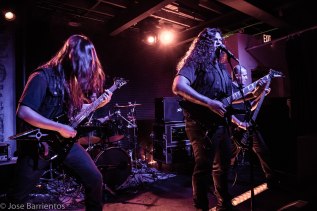 In a recent performance at The Resident, Thrown Into Exile shared the stage with Imperialist, among other bands in a quaint yet brutal venue. The bar poured beer, Modelo to be exact, paired with a tequila shot, and the fans were lit as Imperialist paved the way for headliner Thrown Into Exile. Imperialist, a band from California displayed their dark metal and brutalized the stage. This band has insidious riffs, melodic black metal manifested in Monrovia, Ca. Guitarist and vocalist Sergio Soto unleashed his demon like vocals while Bryant Quinones unleashes evil riffs paired by the depth of Josh Alvarez on bass. Imperialist is an act that delivers raw black metal, and Rod Quinones blasts those cannons with fury and force. The stage was lit dark, with crimson lights to add an eerie tone to their set, evil rose that night as Imperialist concluded their invigorating set.

Thrown Into Exile set up, and lit the place on fire with their brutal metal. Joey Dalo, their new addition on vocals ravaged the scene even with a flu in full effect. This vocalist’s energy is contagious, and makes groupies fall on their backs as he exploits his vocal cords. Mario, a charismatic guitarist headbangs to sounds of his guitar, and smiles at the crowd as he enjoys his deliverance of evil! A brutal bassist, Dave (of the dead) Corsile, slaps his bass, making sounds that resemble locomotives, with speed and precision he ads depth to Thrown Into Exile. 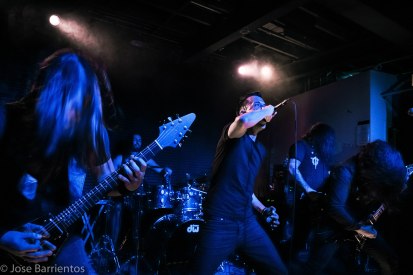 Ray Sanches is pure talent, he shreds away with ease, and teams up with mate Mario to entice the audience with pure metal sounds. He is a master of his craft. Drummer Scott Shelko is an intense drummer, his sound is catastrophic and excites the masses. The band has a killer show coming up, they will be opening the stage for Iced Earth on the Incorruptible Tour, and the masses will hail TIE (Thrown Into Exile). Their chemistry on stage is a certain key to their success thus far. Make sure to get your tickets for this coming brutal show at the Belasco on March 8th, and make sure to get your copy of their new release Safe Inside.