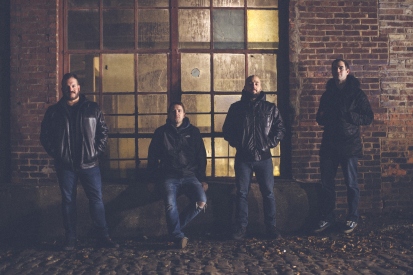 VEXES’ upcoming debut album, Ancient Geometry, will hit stores this Friday, February 23, 2018. The album is available for digital pre-order via iTunes, Amazon, Google Play, and Bandcamp (some with instant grats of released singles), and in physical format via Big Cartel with other merch options here. You can also stream tracks via Spotify here.

New Jersey-based VEXES – featuring frontman Charlie Berezansky (ex-Downstage and Vessl), guitarist John Klagholz (ex-Fury of Five and Vessl), drummer Justin Graves (ex-A Life Once Lost), and bassist Bobby Carpenter (ex-A Life Once Lost) – came together after Klagholz and Berezansky’s previous band, Vessl, called it quits. The two were interested in starting a heavier project to filter some different ideas into. After finally completing their demos, they sent them to a few respected musician contacts of theirs, and within a few weeks, heard back from drummer Justin Graves. Graves was impressed with the tracks and hinted at wanting to join the band. Soon after, they recruited Bobby Carpenter to play bass.