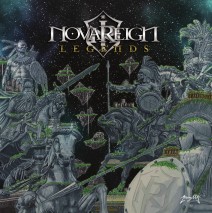 Legends, the debut album from Los Angeles’ NOVAREIGN, will officially be in stores and online tomorrow, Feb. 16th. But the band has made their stellar recording available for streaming today on their bandcamp at https://novareign.bandcamp.com/album/legends
In addition, NOVAREIGN filmed and edited an insightful and personal 10-minute video allowing the band members to comment on the album’s creation and its 9 songs. Prior snippets have been unveiled about specific songs, such as the singles “Beyond the Cold” and “Heavy Heart”
Influenced by bands like Iron Maiden and Dream Theater to Dragonforce and Angra, NOVAREIGN are the next generation of Progressive Power Metal telling stories in musical literature speaking to a generation influenced by epic fantasy tales, comic books and video games.  Having made a reputation for themselves through energy-abounding live shows filled with nonstop shredding guitar interplay and powerful traditional metal vocals NOVAREIGN are poised to take their craft worldwide and compete on a larger stage.
NOVAREIGN will perform their headlining record release show Saturday, Feb. 17th at DiPiazza’s in Long Beach, CA