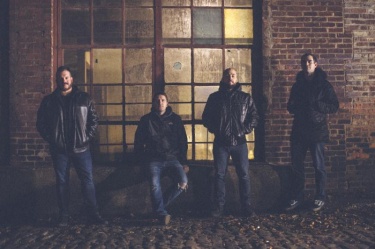 VEXESis unleashing their groovy, charging, yet melodic intro track to Ancient Geometry, entitled “Helion”. The track shows a more aggressive side of the band in comparison to their previously released singles, and can be heard as of today in rotation via Sirius XM Liquid Metal (www.siriusxm.com/liquidmetal). You can also stream the track via the band’s YouTube channel here: https://youtu.be/SdHJeQj59u8
Guitarist John Klagholz says: “‘Helion’ was the first song we wrote together as a band, and basically encompasses everything that we want to hear in our music, both rhythmically and dynamically. From a lyrical standpoint, Charlie wrote it from the viewpoint of attempting to escape your own consciousness, as if your mind was the very thing making you sick, keeping you from making vital changes, etc. Almost as if it was from the view of a hypochondriac.”
Fans can let Sirius XM know what they think of “Helion” by tweeting support and tagging @SXMLiquidMetal on Twitter, or leaving comments on the Sirius XM Liquid MetalFacebook page.
Ancient Geometry is available for pre-order here (with the tracks “Lift” and “Plasticine” as instant grats). More digital and physical pre-order options are coming soon.
Combining gripping alt-metal atmosphere and experimental post-rock inspiration with a healthy dose of post-hardcore undertones, VEXES breathe new life into this genre set to deliver something fresh and instantly absorbing. Even more masterful – the members of VEXES visit entirely new musical realms in comparison to those explored by the bands that moulded them, completely avoiding pronounced reflections of their seasoned pasts.
New Jersey-based VEXES came together after John Klagholz and Charlie Berezansky’s previous band, Vessl, called it quits. The two were interested in starting a heavier project to filter some different ideas into. After finally completing their demos, they sent them to a few respected musician contacts of theirs, and within a few weeks, heard back from former A Life Once Lost drummer Justin Graves. Graves was impressed with the tracks and hinted at wanting to join the band. Soon after, they recruited another former A Life Once Lost member, Bobby Carpenter, to play bass.
Ancient Geometry was engineered and mixed by frontman Charlie Berezansky at Skywire Sound Studios in West Creek, NJ, and mastered by Mike Kalajian (The Dear Hunter, Saosin, Emmure) at Rogue Planet Mastering.
Ancient Geometry track listing:
1. Helion
2. Lift
3. Decisions Are Death Here
4. Plasticine
5. No Color (feat. Mikey Carvajal of Islander)
6. Terra
7. Lush
8. Meridian Response
9. Photochrom
10. Ancient Geometry
VEXES online:
www.facebook.com/wearevexes
https://twitter.com/wearevexes
https://vexes732.bandcamp.com
VEXES is:
Charlie Berezansky – vocals guitar, keyboards
John Klagholz – guitar, keyboards
Bobby Carpenter – bass
Justin Graves – drums