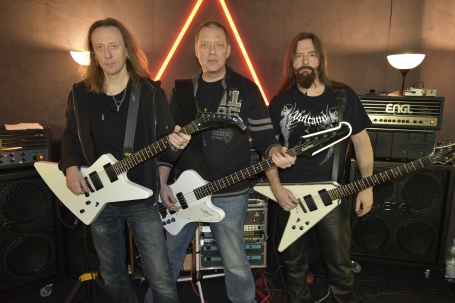 Germany’s leading Gothic Metal band CREMATORY are currently working on the new studio album titled “Oblivion”, which will be released on April 13th, 2018 via SPV / Steamhammer worldwide.
According to the motto “Never change a winning team” CREMATORY have chosen again Kristian Bonifer as producer and the Kohlekellerstudio for the new album.
Through collaboration with new idea donors and arrangers such as Stefan Glass, Dirk Riegner and Walter Stobbe, as well as the intensive cooperation of the two new guitarists Rolf and Tosse and the new bassist Jason, not onlymassiveguitars were given to the new CREMATORY songs but also interesting influences and elements that makes the band doing a step forward even after 25 years of band history.
The hit factory CREMATORY is in full swing working in three shifts, which makes the new studio album “Oblivion” an absolute masterpiece.
For More Info Visit:
www.crematory.de
www.facebook.com/crematory
https://www.facebook.com/steamhammerofficial
www.spv.de