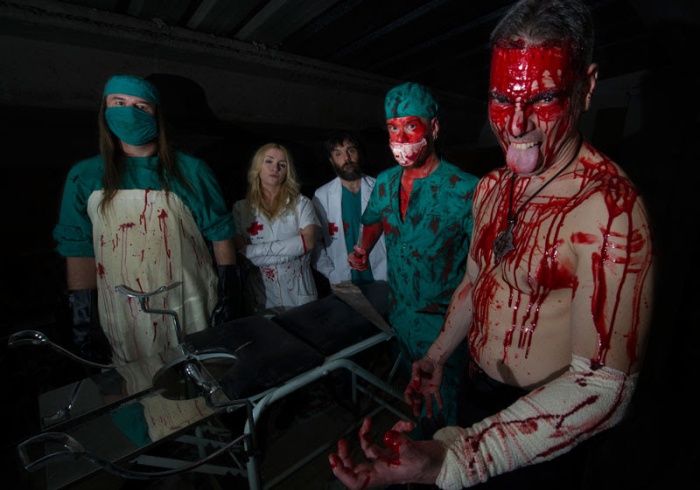 Stream / share HAEMORRHAGE‘s “Nauseating Employments” RIGHT HERE.
Relapse Records announces the new album from HAEMORRHAGE, aptly titled We Are The Gore, for October release, issuing the album’s lead track “Nauseating Employments” for streaming.
Spanish goregrind stalwarts HAEMORRHAGE return to spew forth their most ferociously (de)composed album to date with their seventh studio album We Are The Gore. Embalmed at Mpire Studio in Madrid by Alfredo and Javi Ustara and mastered by Brad Boatright (Obituary, Nails, Skinless), We Are The Gore embodies fourteen tracks over thirty-five blood-soaked minutes of pathological gore, ideal for listening to in mortuaries and mausoleums. With numerous guest appearances from current and former members of Carcass, Impaled, Dead Infection, Ghoul, Gruesome Stuff Relish, and others, HAEMORRHAGE takes their nauseating blend of scalpel-sharp riffs, triple threat guttural vocals, and bone-scraping rhythms to a new extreme. One listen to We Are The Gore will leave you soaked in buckets of bile and feeling like a freshly made cadaver.
Listen to “Nauseating Employments” via a gore-filled lyric video via YouTube HERE and Bandcamp plus all streaming services at THIS LOCATION.
HAEMORRHAGE vocalist/guitarist Luisma issues of the new album and single, “We are totally excited about this song’s premiere. It was so hard for us to keep everything secret during this time. We think we recorded our best album and what we wanted is show everyone what we did, but we had to wait for six months. Now the wait is over and we hope our fans will love our album. This song is the first on the album and one of its most brutal songs. It’s also perfect to tell everyone what the album concept is about, that is the people that works in the disgusting side of life… you know doctors, nurses, undertakers, cremators…”
We Are The Gore is set for release on October 6th on CD, LP, and digital formats via Relapse Records. Physical packages and digital preorders are available via Relapse.com HERE and Bandcamp HERE.
We Are The Gore Track Listing:
1. Nauseating Employments
2. Gore Gourmet
3. We Are The Gore
4. Transporting Cadavers
5. Bathed In Bile
6. The Cremator’s Song
7. Medical Maniacs
8. Forensick Squad
9. Gynecrologist
10. Miss Phlebotomy
11. C.S.C. (Crime Scene Cleaners)
12. Prosector’s Revenge
13. Organ Trader
14. Intravenous Molestation Of The Obstructionist Arteries (O-Pus Vii)
15. Artifacts Of The Autopsy (Bonus Track)
Influenced by the rising grind/death metal scene of the late ’80s, Luisma and Jose had the idea of forming a band in 1990 that would eventually become HAEMORRHAGE. Almost twenty years and thousands of dissections later, HAEMORRHAGE continues to bring their unique blend of goregrind to mortuaries and mausoleums everywhere.
HAEMORRHAGE self-injected itself into the world with the Grotesque Embryopathology cassette demo in 1992. Two splits with Exhumed and Christ Denied followed before the release of their debut album, Emetic Cult, via Morbid Records. The band went on to release four more full-length albums (Grume [1997], Anatomical Inferno [1998], Morgue Sweet Home [2002], and Apology for Pathology[2006]) with Morbid Records; alongside dozens of splits with Impaled, Gruesome Stuff Relish, Disgorge, Dead Infection, Nunslaughter, and more. In 2011, HAEMORRHAGE signed with Relapse Records for the release of Hospital Carnage, featuringfifteen ferocious tracks of murderous death metal, replete with guttural vocals, meaty riffs and powerful blast beats that convey the primordial spirit of goregrind’s early days.
Now in 2017, with the addition of new drummer Erik Raya, HAEMORRHAGE is set to spew forth their most ferociously (de)composed album to date with their seventh studio album. We Are The Gore is an album dedicated to the people who work in the “dark side of reality.”
HAEMORRHAGE:
Luisma – Guitar/Vocals
Ana – Guitar
Lugubrious – Vocals
Ramon – Bass
Erik – Drums
https://www.facebook.com/HaemorrhageGore
https://haemorrhage.bandcamp.com
http://www.relapse.com
http://www.relapserecords.bandcamp.com
http://www.facebook.com/RelapseRecords
http://www.twitter.com/RelapseRecords