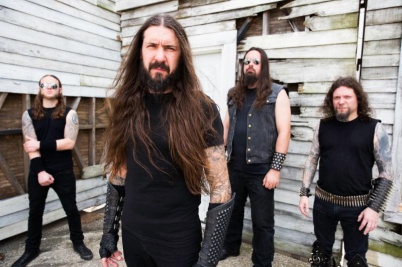 Goatwhore the New Orleans purveyors of brutal death metal will unleash a furious harmonic album titled Vengeful Ascension via Metal Blade Records this coming June 23rd. Goatwhore has been touring intensely since last year, while doing some work on this killer album. The album is a deadly punch to the throat. Each track has adrenaline, and brutal attacks. To name a favorite song off this album will not pay justice to the work by Sammy Duet, Zack Simmons, Robert Coleman and Louis B. Faigoust II. If you are ready for a nuclear riff metal meltdown check out the intro track “Forsaken”, this song has heavy chords, and gruesome vocals, it prepares you for what is to come; a barrage of pain. The drums kick in with a great pattern, building up to the extreme sounds of cathartic guitars, providing an intense sound. 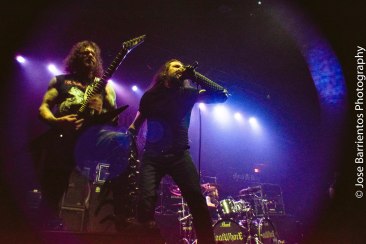 The titled track “Chaos Arcane” is aggressive, and a skull smasher. The song kicks in with a thrash metal riff, brutal drums and depth added by a fast bass. The guitar solos on minute one is fast and to the point, chaos is proclaimed. As the album goes one, so does the violence; and the song-“Drowned in Grim Rebirth” kicks off with a fast clash on both guitar and drums. The vocals by Louis Faigoust are simply demonic and the song is a laceration of pain. This record will definitely place Goatwhore in the shelf where all other deadly metal bands reside, where the brutal creators of death metal dwell and evil is exhumed from its vile grave with catastrophic hymns like “Abandon Indoctrination” and “Mankind Will Have No Mercy”. That track has a trash metal sound that only the legendary warriors like Anthrax, Death Angel and Metallica were able to generate with vile intent.

This is what Ben had to weight in on-“Working with Rutan was awesome,” says GOATWHORE frontman Ben Falgoust. “We did some great records with him. But you come to a point where you’re like, ‘All right. Let’s try something new.’ It was part of trying to remove ourselves from a comfort zone and a risk thing we needed to take. Plus, we really wanted to hit the essence of where we are live and what better way to harness that than by having our live sound guy involved. Jarrett is knowledgeable with the studio stuff. He also knows how we sound coming out of a PA and we really wanted to get closer to that.”

The album closes with a track titled “Those Who Denied God’s Will”, an aggressive track that will make you rage in the mosh pit. Goatwhore will conquer your ears with their intense sound, and violent track specially the ones off their new album Vengeful Ascension.

One thought on “Goatwhore, A Violent Ascension”