Last Saturday, ADHD hosted what was a brutal display of metal at the Malone’s concert venue in Santa Ana. All bands were exclusively local bands from California, the genres varied from black metal to thrash metal and the ambiance was set with the intensity of all bands that participated. Acts like Sacrificial Slaughter, Nokturne, Voices of Ruins and Exmortus created a neck breaking atmosphere. The Ruin Fest had commenced and the end of year couldn’t have been commemorated any better than with masters of shred, gory vocals and malignant lyrics.

On the separate stages, fans would alternate after each band finished playing their set and they were ready for more head splitting sounds. Sacrificial Slaughter played an insane set, with an energized vocalist ( Steve Worley) who roared to the sounds of the guitars (Necro Nick & James Sorley) tremolo and decapitating drum work by Jake De Los

Santos. The band delivered a magnificent set of reckless tracks, the fans raged as the bassist  (Jorge Dominguez) virulently slapped the bass and the guitar riffs were relentless. Sacrificial Slaughter Hail from Corona, California with a blend of death metal and grind core; non-the-less they executed their music savagely and infected the audience with rage and the plethora of guitar solos were captivating.

Another band that delivered a potent set was Gravespell surfacing from San Diego, Ca. They have killer riffs and the drummer ravaged his kit as the bass notes were delivered in a rampage to demonstrate a deeper tone. This band surprised me, as they went on 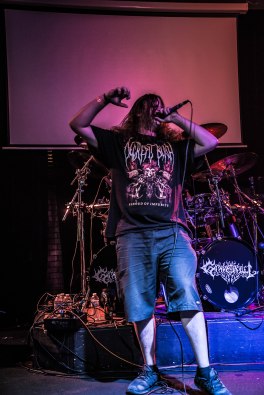 stage and immediately delivered their best songs captivating the attention of the by standers. The melodies were present as they played songs off their latest album titled Frostcrown, they are a blend of thrash metal and melodic power metal with elements of heavy metal and black metal. A perfect composition, and live performance is what this band exposed Santa Ana to that night. With a progressive touch on guitars, Gravespell raged harder than a 70’s rocker on acid. This band has a great future ahead, as they continue to deliver magnificent work.

There was a moment for clean singing in this bill too, and the band who delivered powerful clean chords were Thorns of Sin. With their perfectly executed set, both guitarist played with passion and energy. They delivered their most notorious work on stage and the crowd were sucked in to the vortex this band created.

Sergio Varela is the creator of all aspects of this band, however the line up he conjured for this show was far beyond great. Their chemistry on stage was natural, as solos were played, as the drums were hammered furiously; this Blackened thrash metal band conquered the ears of those whostood before them.

The following act was no other than black metal purveyors Imperialist. Crawling from the dark corners of hell, Imperialist is the modern wave of black metal rooted to old school legendary devastating Norwegian Black Metal. Their sound is riveting. However, their theme is a bit different which relates to space and the future a different take but the musicianship is there. Their

live show was captivating, with fog setting the dark atmosphere all four members stood tall on stage. They violated their guitars, bass and drums to perforate your soul countless time in a vile attempt to deliver furious music notes. Sergio Soto, on vocals and guitars delivered an ominous recital of malignant lyrics, meanwhile behind his throne sat Rod Quinones. Ron Quinones hammered furiously to songs like “The Singularity”, a mind bending black metal tune. Joshua Alvarez on bass headbanged as he annihilated those who stood before him with ease, perfect synchronicity at its finest. Bryant Quinones, the second guitarist played marvelous rhythmic guitars and expelled vicious riffs with talent.  The set was dark, and their sound was simply a mind bending vortex, which will drag you in to the darkness with classic black metal style. Imperialist is on the rise of raw black metal straight from California, if you are looking for that vicious attack make sure to check out their newest release titled Cipher out now.

There was another black metal act on the bill and that was Los Angeles, Ca local named Nokturne. The band has been active since 2005, with some line up changes with remaining original bassist Necrovomitus and guitarist Kaiser Drakon (aka Funeral). The very first time I heard their sound was from the album titled Embrace of Dark Ages and I got sucked into the rawness and heart chilling sound they delivered. On stage you could see the new vocalist Pogrom goring and delivering a brutal set. The band sounded tight, with drummer Lord Doom slamming away as he wore a skull mask. The speed he delivered each blow and pow was phenomenal and mesmerizing to watch. The guitar work done by Funeral was what captivated me as a teenager, filled with distortion, fury and darkness. The band delivered a black arts performance, you must watch this band live if its the last thing you do on earth.

A Malone’s venue favorite, Voices of Ruin played a neck breaking set, per usual the fans went crazy. This band delivered melodic death metal at unprecedented speeds with gory vocals by Dave Barrett. Both guitarist on each end delivered a skull bashing performance, with speedy guitar solos by Tom Barrett and heavy riffs (Steve Carlton) giving depth to the bass work by Wally Myers; Voices of Ruin amped the crowd. Voices of Ruin have toured world wide gaining fans from all corners of the world and Santa Ana receives them with arms wide opened each time they play in the area. The drum work by Lonnie Vanhorn is a destructive force which allows fans to mosh and rage. The band has been active since 2008, and their following keeps growing as they play with passion.

The night came to an end as the headliner and masters of the shred went on stage, Exmortus the Whittier, California locals brought their sword and shield to Malone’s. The fantastic duo Jardan “Conan” Gonzales and Chase E. Baker are a thrill to watch live. With their alternating killer solos to their mesmerizing chemistry on stage, Exmortus enamors lovers of the steel. The band currently released their newest endeavor titled The Sound of Steel, via Prosthetic Records and it is a powerful melodic piece of work. If you are fond of thrash metal, and songs like Rainbow’s with battle themes, sword yielding and bloodshed than Exmortus is for you. Each track is technically composed with the blend of neoclassical metal and the hammering on drums by Adrian Aguilar who stepped to the throne after Carlos Cruz; definitely a great fit. His energy and speed will leave you speechless, all you see is his long curly hair moving from place to place. Phillip Nunez on bass executes magnificently. From tracks like “Feast of Flesh” to “Riders of Doom”, you are guaranteed a plethora of perpetual guitar solos, bridges that will blow your mind and hammering at speeds of light. There was a special performance by the band, in spirit of the holiday season they performed a Christmas song, pure joy indeed.  The sounds of Exmortus are being recognized in Germany, Canada and America it is only a matter of time for them to blow to larger proportions. Conan recently was nominated for best guitarist by Metal Injection, and his performance live and on record defines what he can do and continue to deliver with his axe. Chase Becker is simply a monster of the shred too, playing with agility and ease he delivers hammering riffs, solos that will bend your mind and floor you. Make sure to check out their newest release The Sound of Steel and check them out live with legendary thrash metal kings Death Angel at San Francisco’s Slims. 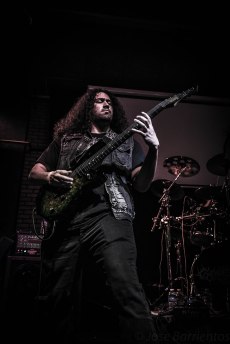