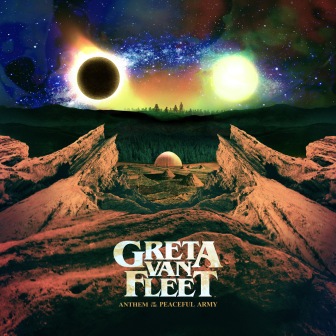 Greta Van Fleet, the Michigan rock & rollers quartet  have composed their debut album inspired by the likes of classic rock. The four talented artists were raised on their parent’s vinyl collection witch fed the machine that is now Greta Van Fleet, a soulful rock and roll ensemble. The album is titled Anthem Of The Peaceful Army, a compilation of modern rock & roll giving the over saturated pop and rap world a breath of fresh air. This album is  packed with perplex blues/rock & roll riffs that will definitely transport the flower children to the times of Woodstock, and an era of free love. Their sound is comparable to that of Led Zeppelin and Pink Floyd with a modern touch yet not straying too far away from the roots of such swaying tunes from the ‘70s.

The album kicks off with a soothing track titled “Age of Man”, a very tranquil sound, as you hear Josh Kiszka amazing vocals striking immediately – “In an age of darkness light appears and it ward away the ancient fears” the notes he hits here are astonishing. The entire song has a compelling sound that will certainly make you want to light sit back and relax. They move on to a more upbeat track titled “The Cold Wind”, with blues/rock & roll riffs that add melody and rhythm fit for lovers of the night. This album can definitely revive the Sunset strip scene.

Greta Van Fleet demonstrates their ability to play their instruments with ease, and in an exquisite way like on track “Lover, Leaver (Taker, Believer)” you can hear the technicality by Jake Kiszka on guitars and the mastering of drums by Danny Wagner; the bass (Sam Kiszka) is prominent on this track as it is in the entire album giving it more of a heavier rock & roll sound. Greta Van Fleet are sweeping the nation with their single “When The Curtain Falls” which talks about a fan loving an actress in the Hollywood scene, something you hear often in this mad world. However, their story telling is derived from the sounds of the ‘70s rock & roll era and the album will bring back this sound to the modern days. For lovers of classic rock and roll, harmonics, clean singing; and simply great music the track “Mountain of the Sun” is one of those songs that will have you dancing to the sound of rock & roll. Vocally, Josh Kiszka adds a diverse style, with rhythm and perfect pitch adding to the track “Brave New World” a tantalizing atmosphere along with the instrumentation that will instill ecstasy to your brain sooting your soul. Greta Van Fleet have delivered a strong debut album, which will emit a translucent soulful energy. Be sure to get the copy of Anthem of the Peaceful Army out via Lava/Republic Records.