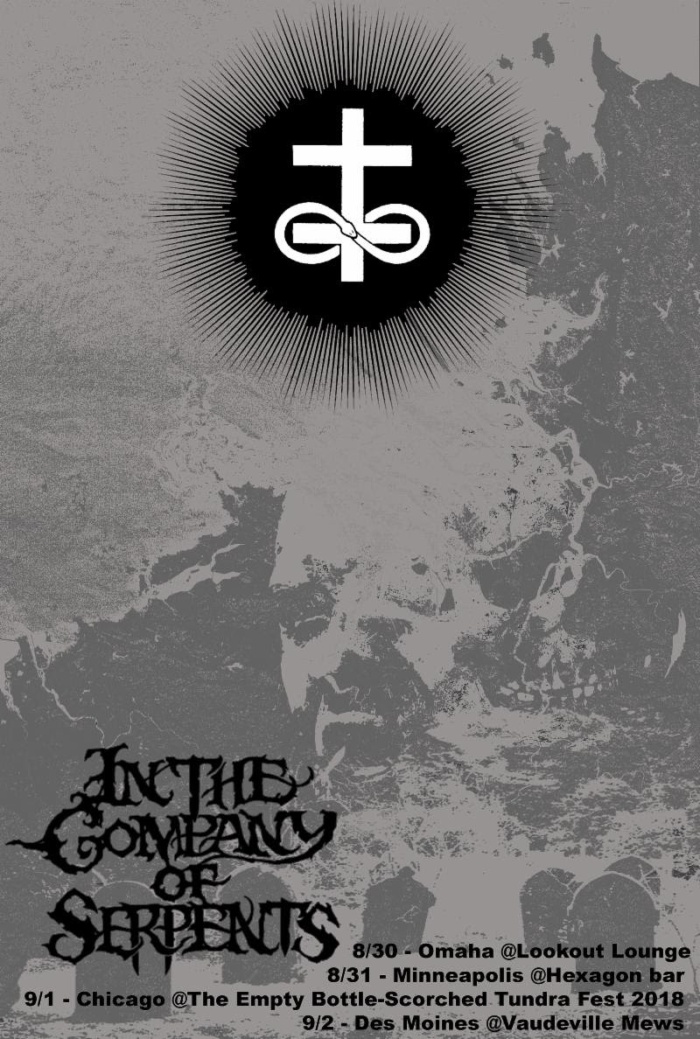 Denver doom practitioners IN THE COMPANY OF SERPENTS will return to the stage late this summer on a short run of live dates surrounding their performance at this year’s edition of Scorched Tundra Fest in Chicago, Illinois. Set to commence on August 30th, the mini journey includes shows in Omaha, Minneapolis, and Des Moines. See all confirmed dates below.
Comments vocalist/guitarist Grant Netzorg, “We’re looking forward to getting back on the road for this short run, and are elated to be sharing the stage with titans like Sumac at Scorched Tundra, and our friends in Aseethe and Former Worlds on the surrounding dates. We’ll be performing some new material which is forming the core of the record we’re currently writing, and are excited to see how people respond to what we’ve conjured.”
IN THE COMPANY OF SERPENTS:
8/30/2018 Lookout Lounge – Omaha, NE w/ Dopecorpse, Rift
8/31/2018 Hexagon Bar – Minneapolis, MN w/ Former Worlds
9/01/2018 Scorched Tundra Fest 2018 @ The Empty Bottle – Chicago, IL w/ Monolord, Sumac, Lair Of The Minotaur, Yakuza, Telekinetic Yeti, Couch Slut
9/02/2018 Vaudeville Mews – Des Moines, IA w/ Aseethe, Traffic Death

IN THE COMPANY OF SERPENTS continue to tour in support of their stunning Ain-Soph Aur full-length self-released earlier this year. Hailed for its, “towering sludge riffs, vocal-cord-shredding roars, and somber brooding atmospheres,” by BrooklynVegan, the six-track offering takes its name from the three veils of negative existence which precede the manifestation of the material universe in the philosophy of Hermetic Qabalah, a Western esoteric tradition involving mysticism and the occult. The phrase translates to “Limitless Light,” and is emblematic of the Qabalistic concepts which are central to the record. Ain-Soph Aur was captured at Flatline Audio in Denver by Dave Otero (Cattle Decapitation, Khemmis, Cephalic Carnage).

Stream Ain-Soph Aur at the IN THE COMPANY OF SERPENTS Bandcamp page at THIS LOCATION.
IN THE COMPANY OF SERPENTS traffics in sonic catharsis. Their music inhabits the strange fringes between sludge metal and sprawling Spaghetti Western scores, constantly striving for visceral power and raw intensity, contrasted with eerie, spare instrumental passages. Founded in 2011, the Denver-based duo consists of Grant Netzorg on vocals and guitars and Joseph Weller Meyer on drums. Ain-Soph Aur serves as the follow-up to the band’s critically-lauded Merging In Light EP, issued in the closing weeks of 2014.
“…like a burning landscape alternately experienced from above the mesmerizing flames and within the perilous inferno.” — Bandcamp Daily
“…an inspiring work that sets the standard for heavy music in 2017,” — The Sludgelord
“…devastating from beginning to end…” — Outlaws Of The Sun
“…crushing, spacey doom that is filled with dissonant sludgy tones and dark, yet surprisingly elegant, melodies…” — Exclaim
“…downright meditative at times, but the real magic is that in certain spots it manages to be that when they’re playing their quietest pieces as well as when they’re at their most demonic.” — Marquee Magazine
“A gothic noir rules Ain-Soph Aurlike a dream. The record hypnotizes you, allowing you to relax and fully engage with the performance. It’s stage-like, sculptural and poetic, never distancing itself from what it wants (or knows) it can be. And this is a remarkable trait for a band and a record.” — New Noise Magazine
http://www.facebook.com/InTheCompanyOfSerpents
http://www.inthecompanyofserpentsdoom.bandcamp.com