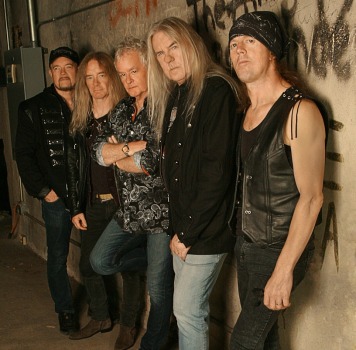 Since 1970, during a movement called the New Wave Of British Heavy Metal, acts like Iron Maiden, Judas Priest and Saxon invaded America. Those legends do not rest, and will continue to bring neck breaking heavy metal.

In the year 2018, one of those glorious bands will unleash a classic old school heavy metal album, that is Saxon. The sounds of powerful chords, and striking drums will make you rock hard. Peter Biff Byford’s vocals are powerful and harmonic as usual, for a talented musician like himself, one can only ask how he keeps such heavy metal voice alive. The record kicks in with an intro track followed by the titled track “Thunderbolt”; a deliverance of pure heavy metal. The drums come in hot, they will make your head explode, with fret slides the song ravages your body as Peter Byford sings with impact. A majestic guitar lick makes an appearance in minute 1:20 and the song continues its riveting sound. A perplex guitar solo kicks in in minute 2:20, with agile hammering, pulling and skills, one track to make you headbang restlessly.

The sound of classic heavy metal is a doze of fresh air, as this music scene gets extreme, it is important to continue listening to the metal gods of the 70’s. This record is a rendition to the gods of heavy metal. One seeks for true heavy metal, those riffs that you will remember for ever, and want to learn to play on guitar riffs that come once in a lifetime; “The Secret of Flight” has that riff. The intro riff is astonishing, with pick tapping, this riff slows the momentum but brings skin crawling perfection. The song proceeds to leave you in awe as the guitar solos kicks in. The constant synchronicity between bass and vocals is imminent, as the rhythm  is set by both elements this song levitates your soul with pure metal. A sinister force approaches as the song “Nosferatu (The Vampires Waltz) commences. The clouds float in as Nosferatu prances with eerie movements to this dark waltz. The lyrics are intriguing, this story is told in an eloquent style, with sounds only Edgar Alan Poe can use as soundtracks to his tales. Once this nightmare is over, you are left with desire to headbang, and “Predator” allows you to do so. The heavy chords that play in the intro are the fuel you need to set the fire as you mosh in the blazing pit. The song is heavy, and powerful and will leave you wanting more. It is best to fastened your seat belts as you go through this album, as you might be in for a wild ride, the record will bring heavy metal back to your playlist.

Saxon is setting on a voyage, where they will tour selective European tours, as Part 1, and part 2, will be in The United States with Judas Priest. A British invasion once more, one that has been long awaited for. Raise your horns, and be seduced by the heavy metal sound Saxon offers you in this 11 track album. The album Thunderbolt will be released on February 2nd via Militia Guard Label (Silver Lining Music) get your copy and be ready to headbang.

In the mean time check out this video to “Thunderbolt”