The reincarnation of Venom as Venom Inc has been a blasphemous spell cast upon humanity, one which allows metal heads to rejoice in the music world. The classic lineup of the previous Venom, consisting of  Jeffrey Dunn “Mantas” and  Anthony Abaddon with the addition of previous 1989-92 era bassist Tony “The Demolition Man” Dolan are currently touring in support of their Ave Satanas release via Nuclear Blast Records. They have supporting acts like The Convalescence, Toxic Holocaust and Goatwhore, all acts who in their own way and with their unique sound are ravaging stages across America. This past Monday night, a packed Slims in San Francisco witnessed what metal music can do, unite a multitude of people ready to rage.

The opening act was black metal purveyors, The Convalescence, and with their new release of This is Hell via Unique Leader Records; the band commenced the rapture. This band has incredible riffs  by Zac Lunsford and Brandon Davis and relentless drumming work by Charles Webber, all which convey pure evil on stage. Their keyboardist Katie McCrimmon adds eerie sounds in sections where it needs that evil touch. The vocals by Keith Wampler are diabolical and resonate deep as Ronald Buckley provides a loud bass tone. The band will continue touring with Venom Inc, it is imperative you watch this act. The thrash sound commenced once Toxic Holocaust went on stage, the trio annihilated the crowd. 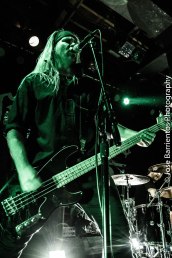 Toxic Holocaust has been on the trenches for some time now, and their chemistry on stage is remarkable. This trio can deliver shredding guitar solos, and brutal drum blasts while goring out on vocals. The fans went berserk once the band played their fast riffs and intense drumming, as well as added  depth on bass by Joel Grind. The fans were wild in the pit, and as one would fall they would pick them right up to continue releasing that rage within.

Goatwhore, kicked in with their brutal New Orleans blackened death metal sound, evoking the demons from within all fans. The pack is gruesomely talented, from the killer guitar solos by Sammy Duet and fast pace drum work by Zack Simmons, the band simply destroys stages. The vocals  by L. Ben Falgoust II, add a gory sound to each track, complemented by the bass of James Harvey. Each track was selected meticulously and executed masterfully during their set. Goatwhore recently released their aggressive album titled Vengeful Ascension via Metal Blade Records and it has been making great standing on the billboard charts. It was demonstrated on stage why these charts ranked them greatly, as the fans moshed all throughout their set. Vocalist Ben,  leads the band with such powerful energy witch is contagious and the venue shakes as fans rage. Their chemistry is undeniable and intensifies with each music note and powerful performance.

The headliner, legendary Venom Inc,  fronted by bassist Tony “The Demolition Man” Dolan closed the night with a powerful delivery. The classic lineup, bandmates Mantas, Abaddon and The Demolition Man played some of their classic tunes, like “Countess Bathory” among a couple of new tracks. The fans were hungry for metal and Venom Inc fed them satanic songs with skillful talent. Mantas, has definitely crafted his axe and executes guitar solos like a metal god. Meanwhile, behind his throne, Abaddon hammers relentlessly to the beat of a machine gun. As the night darkens, so does the set list and The Demolition Man growls with might as the titled song “Black n Roll” butchers all fans. The thrashy song creates a moshpit as big as the venue, fans lose their shit and metal once again reigns. It is no surprise why Venom Inc was successful before, even at their current age, they bring the pain on stage. A message was sent out by the frontman Tony Dolan by saying, “ We have traveled all across this beautiful country from East to West, North To South and no matter what the leaders say you are America metal heads!” The fans got stoked and felt a sense on comradery as their metal idols played their music which they all worship.

Venom Inc raised hell on stage, and the demons before them lavished their ears with metal and diabolical music. Their new record Ave Satanas is out and it is a footprint of what Mantas has to offer and what Venom Inc has in store in the near future. Be sure to check out this brutal tour and hail metal.

Purchase The Convalescence- This is Hell