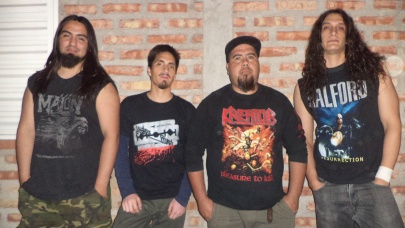 Metal has a purpose and that is to spread a message, whether it is about hate, love, depression, disorders or anti-political views and bands like Megadeth, Slayer and Death Angel among hundreds more are continuing the legacy. There is a band from Cipolletti, Rio Negro Argentina, named Toxica, inspired by bands like Malon, Kreator, Death Angel and Exodus that is creating tracks for the common people to listen to. It can be a metal revolution or a way to open the eyes of those who are blinded by riches, or simply die silent. Toxica has the energy Megadeth inspired, but their sound was shaped by Death Angel’s speed and furious riffs. Toxica’s new album titled Ahogados En Contaminacion (Drowned in Contamination) is an old-school thrash metal album, reviving all aspects of metal, with classic singing, and drumming. The beauty of this, is that in each aspect, Toxica covers the elements of thrash metal reviving or keeping the scene alive.

The message is clear, but it is what makes this band the carriers of it. Perhaps personal hardship allowed the band to create such aggressive music, which could possibly be the anthem to liberals, or simple commoners who live day by day, hoping to find a way to survive. Toxica has their metal roots, and carries the banner of this early 80’s genre that slowly fades away. Their riffs on the titled track – “Ahogados En Contaminacio’ are fast, and have a style only Death Angel can master. Matzii and Maxi are amazing power riffers in this album, the pulling and hammering in track “Terrorismo Financiado” (Financed Terrorism) are insane, definitely a way to shred and represent this thrash metal sound. The lyrics and vocals are in spanish, but do not let that stop you from loving their sound and amazing guitar work, with machine gun drums and sick vocals.  The rage is expressed in songs like “NxHxA” with the drum blasts that will sure wreck your vertebra as you headbang and listen to the frenzied solos on minute 2:20 as you wreck havoc.

The album was brought to you via Witches Brew Records, in December 7 2016. The album is an example of what can be accomplished if you get the right tools and are inspired by the classic thrash metal purveyors from the early 80’s. Order your copy of this band and keep that collection growing of metal bands that define the sound of mayhem.