The night was cold, a chilly one in Orange County’s music Venue, The Observatory. This place was packed loaded with metalheads that were in the venue to witness a magnificent and talented display of musicians. Metal was on the menu, and the bands were diverse in culture, and nationalites. From Canada, the openers, Oni brought to the stage a killer Xylo- Synth which it blended in with the guitars and it was one way this band shredded on stage. The Canadian band just released their debut album via Metal Blade Records and they have been touring since summer of 2016. The record has an intense prog tech death metal sound unlike any other, it has fast tracks with brutal hammering and guttural vocals, as well as the inclusion of a distinct xylo, which makes this band stand out. Canada has given us some of their best metal bands and this is certainly one of them.

The metal madness continued with a local band, straight from Whittier, Ca. a band that certainly knows what they are doing in all aspects of the metal world. Their sound is brutal, with fast pace drums, and a killer execution on guitars. This band shreds on stage and their energy is astronomical. Exmortus plays a type of neoclassical melodic death metal that has all the elements to end up on the billboard charts. The guitar work done by Jandran Gonzalez and David Rivera is majestic. These guys can play classical music with their guitars while Mario Mortus on drums blasts away, the chemistry and impact this band has is astonishing. 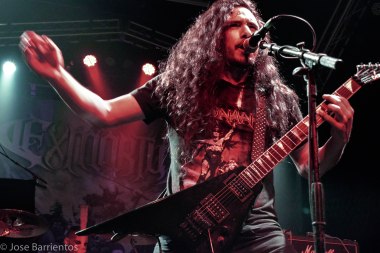 Jardan and David shred on guitars like the gods before them, and they display such a musicianship it inspired and won our editors heart seeing them live. Their live performance left a lot of new fans asking for more, and old fans in awe. This band is definitely the next biggest act made in California, make sure to check them out if you have not, if you already did you know exactly what I’m talking about. Their sound will sure raise some hairs on your spine.

The legions came riding hordes and trampling the infidels as Abbath headed the cavalry. Norway sent a warrior, one geared with a schecter axe ready to slay the tyrants. Once again, the Observatory was shaken by this black metal purveyor and left them wanting more. The amazing Abbath was on stage, displaying the crab walk, his signature move as he played those iconic riffs to songs like “Tyrants” and “To War”. The demonic creatures on stage were creating brutal sounds with the darkest lyrics and nordic melodies. 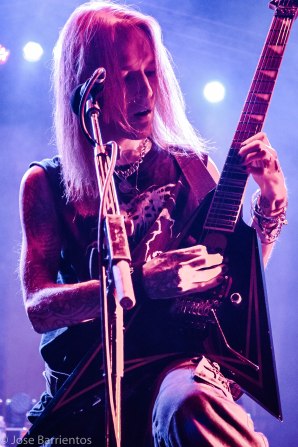 The crowd headbanged, crow surfed and drank beer as the band played their ominous sounds, “Ferirs Hunts” was a favorite for fans of Abbath. However, “One By One” was the highlight of this old metal head’s night after “In My Kingdom Cold”. The darkness dawned upon the masses and the ritual was brutal. The stage was well warmed up for the headliner, a band from Finland, which plays melodic death metal.

Children of Bodom went on stage, Alexi Laiho was up front punishing the shit out of fans with his killer guitar skills. By now, you have already listened to COB, as they are a very well seasoned band. Their skills on guitar, and synthetic keyboard are what makes this band an extraordinary act. The band played songs from their most recent album, I Worship Chaos and some classics like “Lake Bodom” and “Down Fall”. These two tracks are the requiem for metal heads who worship their sound. The guitar solos synchronized with the keyboards has always been the highlight of COB’s performance, seeing Alexi Laiho and Janne Warman play side by side is  enchanting. Holy shit, Children Of Bodom playing their most famous songs from “Follow The Reaper” to “Angels Don’t Kill” just makes it worth seeing them in any stage. The Observatory was the perfect venue to have Children of Bodom displaying their insidious act of death metal. Drummer Jaska W. Raatikainen has always delivered, and this night he butchered the crowd with his relentless beats. Henkka T. Blacksmith was alive and playing viciously those deep notes, which paired up with the drums and gave depth to this band’s sound.

The entire line up is the classic one from 1997, with the exception of Daniel Freyberg, who joined them this year, and he has the notes down like a pro. There is no stopping Children of Bodom and they proved it this night with their brutal metal, magnificent drums, heavy bass and shredding guitars by the one and only Alexi Laiho. Their tour continues, as they will conquer America with their death, hate and angry lyrics make sure to check them out. The legendary Children of Bodom showed California what it’s like to be in a metal show and hear amazing guitar playing and pure fucking metal. Till next time, stay metal see you in the pit.

Check out The Complete Gallery