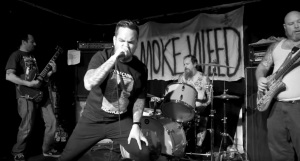 Are you looking for that next brutal lethal sound? Look no further, as Tankcrimes Records brings you Deny The Cross. A power violence alliance, that has songs as short as 11 seconds and give you hell in each song. The second longest song on the album is “Heart Like Siberia”– strikes you with a powerful bass line 38 seconds through, and towards the end it picks up like a juggernaut. Yes, I know what you are thinking, Why listen to it? well this entire album can perhaps help you work out during your cardio circuit and keep you on your feet. grindcore, punk, metal call it what you want we call it a brutal quicky. Yes, fast furious hammering on the drums. However, it all makes sense it’s not just a barrage of fucking hate, which it is but its rhythmic sounds are catchy and filled with anger, violent spastic attacks and creative riffs. Alpha Ghoul was released on July 29th, via Tankcrimes Records. This violent punk sound was recorded at Earhammer Studios with drums recorded by Chris Pierce ( Rorschach, Night Birds).