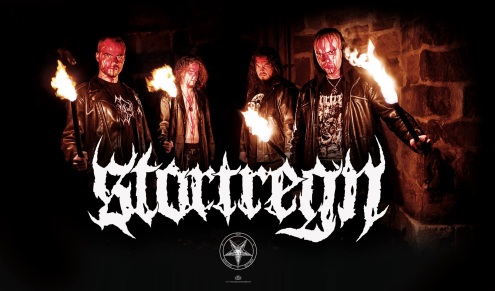 Hailing from Switzerland, black-death metal outfit Stortregn talk touring, drinking beer, recording, and playing the biggest metal show in the world. Their latest effort “Singularity”, an exceptional metal record, is out now. Check it out. Without further ado, Stortregn:

Clash The Impaler: “What is your take on the current state of music and how have you handled the challenges of this digital era as a metal band?”

Duran: Many artists, specially the older ones, talk about the negative side of the digital era. But there are positive aspects as well. It is easier than ever to have access to music, it is easier than ever to distribute it on digital platforms. The easier sharing methods permit the music to evolve very quickly, the scene is very diverse.

CTI: “What was it like playing at Wacken, the biggest metal festival in the world, for the first time last year?”

Duran: It was a great experience, he efforts we put in our music payed off. Having attended the festival many times, it was awesome to be on the other side of the barrier, on stage. The organizers had everything planned, it was almost like clockwork. We hope to return there at some point.

CTI: “Stortregn has been consistently active since 2005. How have you managed to stay in the metal music scene for as long as you have?”

Johan : Through the years, we’ve gone through a lot of problems that lead to some sort of rage, so line-up changes and troubles were inevitable. All these situations fed our expressive goal. We need and we’ve had to fight these situations, both on stage and in our everyday lives. We also became more mature musicians since 2005, as we were just teenagers attracted by exploring dark music and their derivatives.

CTI: “Tell us about your recent line up changes.”

Johan : Adding a new member was a hard decision to take, since we always evolved as a quatuor until now. With the new songs, we really felt the need to go forward and bring the impact the music deserves on stage. Now, Stortregn’s live shows work as a well-oiled machine and we are hungry for playing live.

CTI: “What is the song writing process like for Stortregn? What are some of your inspirations?”

Johan : The song-writing process is always an intense period of focus and discomfort. The reason is we constantly want to move on new and unknown territories and we are ripping our hearts out to create something bigger we have done before. Nowadays, we are exploring more complex and darker music but also with non-metal inspirations like baroque and classical music.

CTI: “What inspired the idea for a Stortregn lager? What would you compare it to?”

Duran: I brew beer. It was almost natural to bring two of my three main activities together and get something going. Many other bands have brewed their own beers. Some are very decent, but most of them just taste as your normal, typical, every day blond beer, without any character. Maybe in order to be appealing to the biggest crowd possible? Who knows. While designing our beer, we thought that it should have it’s own distinct taste. We opted for a smokey blond beer that, until now, people have enjoyed. We’re looking into a darker beer, to fit our music even better.

CTI: “Will Stortregn be touring the US any time soon?”

Duran: It would be great. If we get an offer, we’ll definitely do it.

CTI: “You’ve had the same producer for your last 4 efforts, respectively, who is also a multi talented musician and a one man band. What is it like working with Vladimir Cochet?”

Johan : Vladimir has a very deep understanding of our music and it significance so it’s very easy to work together. Furthermore, through the years we became friends and in a certain way, I consider himself as a part of the band. He’s the one who brings order to chaos.

CTI: “Of all the places Strotregn has toured, so far, where did you like it the best and why?”

Duran: Romania was clearly another world for me. Good, violent, fun memories.

CTI: “What does Stortregn do in their leisure time?”

Johan : For my part, my time is split between teaching and performing as a classical guitarist.

That is how things clashed and answers were given by this brutal act. From brewing their own beer to conjuring this amazing sound, Stortregn did not hold back and let us in their world of creativity, music knowledge and desire to tour America. Together as metalhead listen to this band as they will instill the power of black-death metal in your soul.

Reported by: Clash The Impaler

Check them out ON Spotify

Get their latest album- Singularity