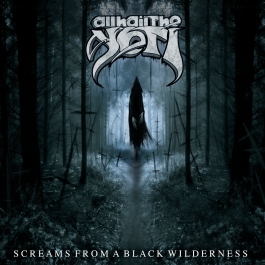 All Hail The Yeti will release their second studio album titled, ‘Screams From A Dark Wilderness’ in April 8th, 2016 via Minus Head Records. This conceptual album is based off a continuation from a track of their previous self -titled album. The track that is expanded into this new entire album is “After The Great Fire”, as this song was a very important for lead singer Connor Garritty. Their 13 song album has titles that can be spine chilling and the sound of their swampy metal is back on track with their new guitarist Alan Stokes. This album has great guitar grooves and heavy drumming, paired up with the gory vocals. All Hail The Yeti’s distinctive sound is present and this is what Connor Garritty had to say about the process of recording this album and some insight to their work.

Rockbrary asked: “Will there be a tour following the album release and what bands are you planning on touring with?

Connor said: “We will be touring very extensively for the next year I am sure!! Right now everything is up in the air. We have a few things in the works but I am not really at liberty to reveal anything yet.”

Rockbrary: “This album is your style, with a bit more groove, could you say the new guitarist’s (Alan Stokes) addition made a difference to the sound?

Connor: “Absolutely. His playing style is very blues based. When you take that and add it to a heavy sound the results is unbelievable. Alan and I dove right in and we never forced or questioned whether it sounded good or not. Once the songs got to the point where the whole band was arranging and hashing them out we were beyond excited with the results.”

Rockbrary: “I noticed the concept of the album, can you tell us a little bit about it?”

Connor: “When the initial writing started I knew I wanted to continue stories from the first record on this one. “After The Great Fire” was such an important track off the self -titled. I wanted to embellish on that story more. So I decided to do somewhat of a trilogy thing. Telling the story in reverse. So “Before the Flames” is the middle piece of the puzzle, which we will be releasing the next video for. Then “Daughter of The Morning Star” is the beginning of it all. “

“Once the songs/videos are all released the story comes together. It is a really cool thing, and if you want to watch the videos in the order they are released it doesn’t make sense as a three part story. They just look like really cool videos. If you watch them in the proper chronological order the entire horrifying picture is presented perfectly! We are very excited to unleash the next videos!”

Rockbrary: “How did you like working with Matt Hyde?”

Connor: “Working with Matt was amazing. He really stepped in and became kind of a fifth member. He was able to pull stuff out of me that I never thought was possible. The entire process was better than we could have ever imagined.

Rockbrary: “Did he see your vision for the concepts album right away?”

Connor: “He did, and a lot of things that were not in the songs originally he came up with and added. He had lots of great ideas that really helped the overall sound.”

Rockbrary: “How long was the recording process?”

Connor: “We started the record in August of 2015. I believe it was completed and ready by October. We spent a bit more time making sure everything was perfect performance wise.”

Rockbrary: “What bands inspired you to play this genre of music?”

Connor: “I listen to so many types of music that it’s hard to really say what specific bands inspire me. But for this band, I would have to say Pantera, Black Sabbath, Acid Bath, Down, Eyehategod and Motley Crue, just to name a few.”

Connor: “Honestly my first favorite band was Motley Crue. I always wanted to be in a band like that when I was a kid. But as I grew up I would say Dax Riggs from Acid Bath. His lyrical style and voice really connected with me when I first started.”

Rockbrary: “So being a big Motley Crue fan did you attend the last concert they had? What is one of your favorite songs by these guys?

Connor: “I did not go to the last concert unfortunately, but I have seen them numerous times over the years. My favorite song is ten seconds to love.

Rockbrary: “What are you most excited about the release of the new album or starting the tour?

Connor: “We’ve been off the road for almost a year now, so I am ready to get back out there for sure!”

Rockbrary: “Can you give your fans out there some words of advice, to those who want to play in a band?”

Connor: “Never give up! Don’t let anyone tell you how you should sound. Do it for the fun of being on stage. Get in the van and tour! You are going to starve, you’ll be stressed. It’s not easy and not for everyone but it will be the best times of your life!”

Rockbrary: “So you are a tattoo artist as well, what form of art do you enjoy doing more, composing music or giving someone a tattoo?”

Connor: “It’s hard to compare the two. I am lucky enough that I worked hard at both and i can have them both in my life.”

As you can tell Connor has a great background on the metal scene, from Motley Crue to Pantera, this lead singer love it all. Their new conceptual album is out April 8th, 2016, via Minus Head Records. Don’t miss out on this heavy swampy Metal band.