There are bands in the world that set the mood, the emotions and allow your thoughts to wonder. A band who ignites a certain “je ne sais quoi” inside of you and allows you to feel melancholic, or the sense of nostalgia is Soilwork. A Swedish Melodic Death Metal band with music fusion from the 70’s created by talented artists like David Andersson on lead guitar as well as clean melodic vocals by Bjorn “Speed” Strid. 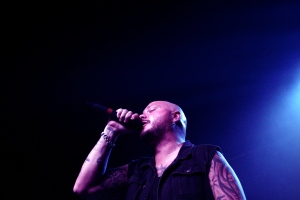 At the basement of the Fonda Theater you’ll find a dark hall of rooms, quiet enough to be able to conduct interviews and have a brew before bands go on stage. Down there David Andersson (lead guitar) talked about what it’s like being part of Soilwork as well as his life off tour. “One of the all time favorites Swedish Melodic Death Metal bands who just released their new album The Ride Majestic, you have been touring with Soilwork on and off since 2006″ Andersson said- “I started touring with them being a session guitarist for various reasons since 2006, I started playing with them in 2013, when we started writing stuff for The Living Infinite the double set album.” this album is the beginning of The Ride Majestic and a take back on melodic death metal. 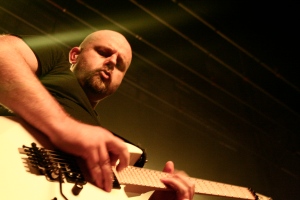 “We did something new and different, we had parts where Bjorn was singing over blasts and stuff like that, and we incorporated the more progressive elements. The more 70’s progressive elements disguised as metal and i guess that is what we tried to give further in this album add the classic 70’s feel and incorporate that extreme drumming. We were trying to regain that melancholic Swedish, Scandinavian feel. In the mid 2000’s we lost the scandinavian metal feel, we sounded more like American metal. Bjorn and I wanted to regain that scandinavian melancholic metal.”Melancholy is the right theme for Soilwork’s The Ride Majestic as it talks about “Death In General” a song that makes you feel what words can’t describe. A little darkness in a time of sorrow, a little pain does not kill the soul it only strengthens your mind and allows musicians to be creative. Soilwork had lost band members and personal loss were also in the midst of this bands career but Bjorn contacted Markus Wibom (bassist) and David Andersson (guitar) to join the band. 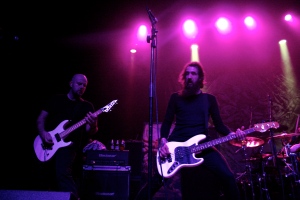 Markus knew the band and he decided to join-“Bjorn called me telling me he wanted to reform the band and I knew the guys so I knew it would be a great dynamic. After some changes in line up and other events Soilwork was back on the radar and we started to write music again.”. 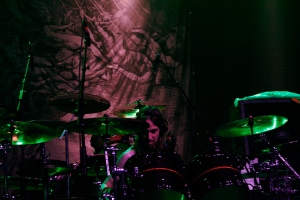 Every Soilwork fan out there can hear the black metal riffs and, Soilwork separates them selves from the rest what drives Andersson to write music that is fast and furious with a fusion of melody? “I listened to Led Zeppelin, Black Sabbath, as i grew older i listened to modern fusion like Travel Tech, i do more theory and use influences that are not metal and try to fuse them with metal sometimes we succeed.”. An artist always has a song they love from the new recorded album more than others, whether its because they wrote the song in its entirety or it simply gets to their core, in this case David Andersson’s favorite song is the self titled song The Ride Majestic however his baby is “Whirl Of Pain.” This gentle metal composer is a full-time Dr. and wakes up early enough to write music that drives crowds insane. “Im really proud of the whole album, but one of my personal favorites is “Whirl of Pain”, I wrote it and its a simple song, but it has a doomish atmosphere. Ever heard the theme song Suicide is Painless of the tv Show MASH? it gives it that doom atmosphere and thats what I was looking for when I wrote it.”-David Andersson. 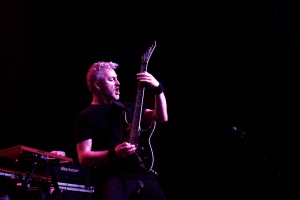 Soilwork is a fusion of melody, lyrics filled with sorrow and set the atmosphere for the darkest days of our lives, they project a contagious energy on stage as they shred their guitars, and the drums never stop beating. Bjorn’s vocals instill euphoria and melancholy as he passionately goes from brutal to rhythmical clean vocals. Swedish Death Melodic Metal contributors, Soilwork, played a ten song set, one that left fans chanting for more. Along With Soulfly and Shattered Sun The Fonda Theater was mashed with heavy music and furious moshpits. Shattered Sun has been touring with Testament and Exodus and also did a great performance in the Mayhem Fest on the Victory Records Stage. 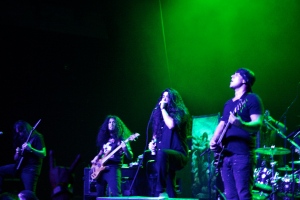 This up and coming band is a mix of death metal with trash metal riffs incorporating a keyboard and gory vocals by Marcos Leal. The bands new album Hope WIthin Hatred is a vicious fast composition of Death Metal, one which will propel their career forward as they improve on live stage. 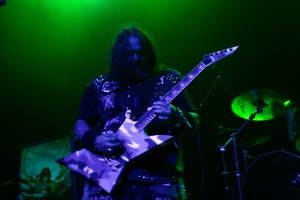 Soulfly was the headliner of the night, Max Cavalera ravaged the stage along with the tribe. Songs from Primitivo to old Sepultura were played. “Arise” was one of the many songs that lit the crowd and rushed them to the pit. 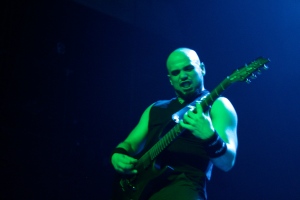 Cavalera would challenge the crowd to get crazy as he would roar to “Roots”, fans would adhere to those decrees non-the-less. 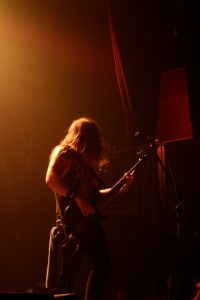 The amps would resonate off Fonda Theater’s floor and the vibrations of the double pedal and bass were piercing. Soulfly is definitely an act to see as their fury and speed will only energize and fill your body with adrenaline lifting you off the ground ready to fight. The tour just started make sure to catch this bands out there in a city near you. 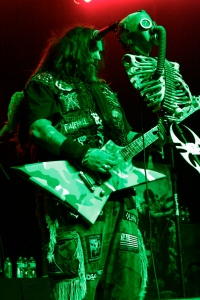 The metal scene is only getting stronger and your support counts, one for all and all for one. Keep those horns up in the air.

Check out a live performance at The Fonda Theater by SOILWORK

3 thoughts on “A Melancholic Day With Soilwork”