Trash Metal is at it’s peak, bands like Annihilator are making sure it doesn’t dwindle down. Fast metal riffs backed up by amazing drumming is a perfect formula for trash metal and Annihilator is keeping that tradition alive. Straight from Canada, Annihilator is making sure their new album Suicide Society gives you a whiplash. With songs like “My Revenge” which is packed with a fast heavy riff and up beat singing Annihilator complete their 15th studio album out in stores on September 18th, worldwide through UDR Music. With his return on the vocals in Annihilator, Jeff Waters also plays the bass all guitars and engineers the sound mix. 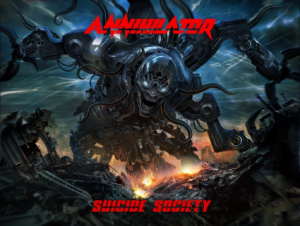 Dave Padden no longer being in Annihilator only allows Jeff to push him self harder to write such crushing and exhilarating songs like “Narcotic Avenue”, a song that has a nice bass bridge leading to a magnificent guitar solo. This album is anything but short of fast guitar shredding and great lyrics. Check out Annihilator out on tour this fall taking over Europe, Japan South America. They will be striking venues near you in North America in 2016, this is a show you don’t want to miss. Jeff Waters sure did a great job writing “Death Scent” it talks about a thirsty killer, but don’t let me tell you what the song is about get your copy of Annihilator’s-Suicide Society.